Isabelle is a bag of tricks type character with utilizing seemingly weak attacks to gain the edge on her opponents. In addition, many of her attacks have secondary features which can also influence the outcome of a match. Isabelle is largely a mixed bag that utilizes various attacks that belies her rather peaceful nature. Many of her attacks have surprising hit boxes and hurt boxes. In addition, they tend to linger - meaning that even after the attack is over; it can still do damage.

In terms of stats, Isabelle is a rather slower character but can jump fairly high. She has surprising air speed and average falling speed. She has a good doge and rolling animations. Her attacks have limited range save for a few of her projectiles. However, they lack in the power department and have lower priority thus causing opponents to be able to take advantage and cancel out her attacks. With her Lloid Donation and Works Project moves, she can also zone the stage. Her Town Ordinance moves can also boost up her stats that she lacks. Overall, she has a high learning curve and can be hazardous in the hands of a skilled player against someone unfamiliar with Isabelle.

Isabelle is fought on the stage "Main Street"

Isabelle is fought on the stage "Town and City".

Isabelle is standing while slightly teetering back and forth on her feet while her hands move up and down slightly by her side. Resembles her pose when greeting the player after starting up the game.

Crouches down and brings up her knees while hugging them with her hands.

Jumps into the air with a happy expression and her hands slightly elevated.

A average running speed but she slows down after a while. She has a tired expression on her face.

Kneels down with her head dropped down. Zzzz's can be seen coming from her.

Trips and lands on her butt.

Balances on one feet with a shocked expression. A red exclamation mark appears above her head as she does this.

Swings the bat with both hands. She closes her eyes at the ending animation.

Slams into the screen with her arms and legs spread out with a adorable >,< face.

Isabelle's trophies can be earned by completing Classic Mode, Adventure Mode, All-Star Mode, and Boss Battle mode. In addition, further trophies can be found during matches and at the Trophy Shop.

Unlock: Collect all of Isabelle's trophies 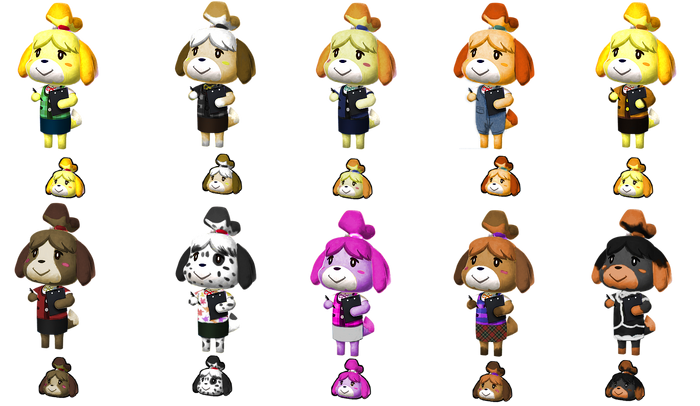 "Do You Need Something?"

Retrieved from "https://fantendo.fandom.com/wiki/Isabelle_(Smash_5)?oldid=2176695"
Community content is available under CC-BY-SA unless otherwise noted.