“A good attitude will always take you further than a bad habit.”
— Isabelle, in Animal Crossing: New Leaf

Isabelle is a major character in the Animal Crossing series, debuting in Animal Crossing: New Leaf. In the game, the player assumes the role of mayor of the town, and Isabelle is the player's secretary and assistant, helping them with tasks around the town, organizing projects, and giving advice to make the town better. She has a twin brother, Digby, who works at the Happy Home Showcase, and her usual coffee is a Mocha with lots of milk and three spoonfuls of sugar.

Isabelle is usually happy, cheerful, and outgoing, if a bit clumsy and absentminded. She always strives to keep a positive attitude and is very dedicated to her job as a secretary. She can also be a bit hard on herself as well when she gets sidetracked, such as when she falls asleep on the job. In spite of her naivety, in Animal Crossing: Happy Home Designer, Digby says that she graduated in engineering in 19 different universities simply because she wanted to.

Since her debut, Isabelle has become the mascot of the Animal Crossing series, as well as becoming extremely popular in her own right, thus instilling as one of the most well known Nintendo characters. As a result of this popularity, Isabelle has appeared in several games outside of the series, appearing in Mario Kart 8 as a downloadable playable racer, an alternate outfit for Felines in Monster Hunter 4 Ultimate, and as a playable fighter in Super Smash Bros. Ultimate.

Isabelle makes her debut in Animal Crossing: New Leaf. In this game, she helps the player in their mayoral duties. When the player first starts, she helps them settle in by offering advice to make the town better. She can also provide optional tasks akin to those assigned by Tom Nook in previous games. She also takes over Mr. Resetti's role of reminding the player to save the game before they quit. Isabelle also assists in the development of Public Work Projects and setting town ordinances.

Throughout the game, she can be found in the Town Hall, though she will appear in the center of the plaza during certain events. During such events, the Town Hall is closed.

In Animal Crossing: Happy Home Designer, instead of being an assistant, Isabelle is instead an employee at the Town Hall. In the game, she hears of the player's renowned house-building skills, and serves to assign faculty projects to work on. She can also have a home built for her by scanning an amiibo card located in Nook's Homes.

Isabelle is set to return in Animal Crossing: New Horizons, though what role she will play is currently unknown.

Like all the characters in Mario Kart 8, Isabelle returns in the Nintendo Switch port Mario Kart 8 Deluxe. She is no longer a downloadable character, and is instead available from the start.

In Monster Hunter 4 Ultimate, Isabelle appears alongside Mr. Resetti as an alternate costume for Felines. When active, Felines' meows will change to Isabelle's voice clips in Animal Crossing: New Leaf.

After appearing as an Assist Trophy summon in Super Smash Bros. for Nintendo 3DS / Wii U, Isabelle appears as a playable character in Super Smash Bros. Ultimate. In her trailer, she is seen organizing the mayor's office in the Town Hall, and talks to the viewer about how she needs to keep working until the mayor comes back. However, she gets a letter from Pete, inviting her to Super Smash Bros.

Isabelle is a semi-clone of Villager, sharing a lot of the same attacks as him. Some examples include their neutral special Pocket, up special Balloon Trip, their down tilt where they uproot a weed, and their up and down aerials where they swing around turnips. She does have some notable differences however; her side special is Fishing Rod, which she casts forward and can grab opponents, reeling them back in and flinging them in any direction. This can also be used to grab ledges, acting as a tether recovery. Her down special, Lloyd Trap, has her plant a Gyroid into the ground. If an opponent steps over it or if the move is used again, it will launch upward, damaging opponents multiple times before launching them with an explosion.

Isabelle's Final Smash, Dream Town Hall, is very similar to Villager's Final Smash; she summons Tom Nook and the Nooklings to build a replica of Town Hall on top of a nearby opponent. It then explodes, which launches the opponent.

It is implied that Isabelle was meant to be an Echo Fighter of Villager during early stages of development, but it was confirmed that she was made into a semi-clone due to her unique proportions to Villager.

Isabelle's design is based upon that of a shih tzu dog. She has yellow fur with parts of her hair tied up into a bun-like design on the top of her head with a red band; the overall appearance of her head is inspired by the design of a bag of Bells, the currency of the Animal Crossing series and what she derives her English name from. She has golden ears, a white muzzle, and has two golden dots beneath her eyes that emulate rosy cheeks.

Depending on the season, Isabelle will wear one of two different outfits. For the Spring and Summer months, Isabelle dresses in a white dress shirt beneath a green plaid vest, with a red lace bow tied beneath her chin, and a blue skirt. For the Autumn and Winter outfits, her ensemble gains a warmer coloration, with her vest becoming solid gold with brown accents, and her skirt a dark green. Outside of work, as seen in Happy Home Designer and New Leaf's Welcome amiibo update, Isabelle wears a pink polo with a white collar and pink frills along the bottom, and blue jeans. She is also near-sighted and requires contacts to see; when not working for the mayor, she instead wears thick, black-rimmed glasses.

Isabelle is very friendly, cheerful, and caring to others. Because of her outgoing nature, she has a big drive to help the mayor make the town a better place. She can also be considered a workaholic, putting her duties as the mayor's assistant over her personal health. She can also be hard on herself when sidetracked, and strives to be the best assistant she can be.

Isabelle is also very clumsy, absentminded, and naive. In spite of this, Digby confirms in Animal Crossing: Happy Home Designer that Isabelle graduated in engineering in 19 different universities, implying that she is extremely intelligent and dedicated despite her clumsy nature.

Isabelle claims to be a big fan of K.K. Slider, and it is also implied that she has a crush on him. However, on Valentine's Day, Isabelle has also shown signs of having a crush on the mayor, regardless of the player's selected gender.

Isabelle returns in Super Smash Bros. Charged. Her moveset is mostly identical to hers in Ultimate, and is again a semi-clone of Villager. However, she does have a new Final Smash called New Year's Eve, where she summons Pavé to build a New Years-themed building. It is functionally the same as her previous one however.

Isabelle is one of the default characters in the game.

Isabelle appears as an Assist Trophy.

Isabelle appears as a referee. 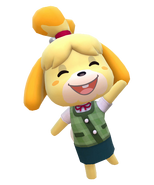 Isabelle in Super Smash Bros. for Wii U 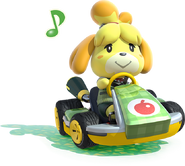 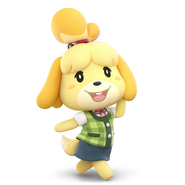 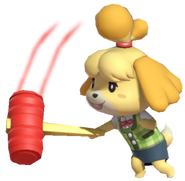 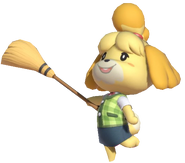 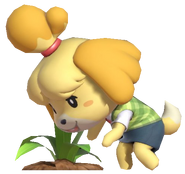 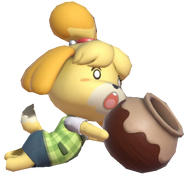 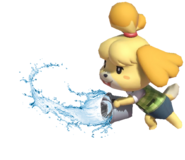 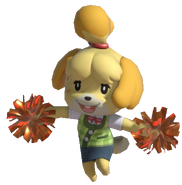 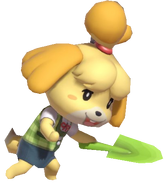 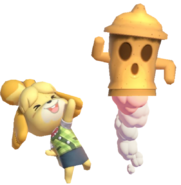 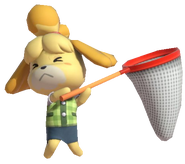 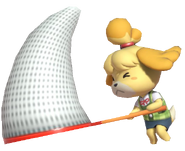