Start a Wiki
Invisible Wario is one of Wario's Reactions in the Wario Land series. It was introduced in Wario Land 3 and has not reappeared since.

When Wario is hit by a potion from a Mad Scienstein, he turns entirely invisible. The only way that anyone can tell where Wario is either by the dust cloud under him or through the screen scrolling. It is used to get past protected doors that rely on sight. It wears off when Wario takes enough damage from enemies or goes through something that resets his state like entering a warp pipe or being covered by a Teruteru.

This form has not appeared in any known fangames. 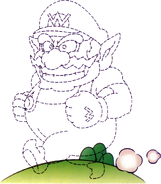 Invisible Wario
Add a photo to this gallery

Retrieved from "https://fantendo.fandom.com/wiki/Invisible_Wario?oldid=2439821"
Community content is available under CC-BY-SA unless otherwise noted.