Invincible Mario is a power-up in most Mario games. Mario turns into Invincible Mario after using a Super Star. Invincible Mario only lasts for a few seconds, however it make Mario resistant to any enemy and can defeat them if he touches them. The only way Mario can die in this form is if he falls into a pit or in lava, being crushed or if time runs out.

In the Mario Kart series, every driver could turn into a form of Invincible Mario when using the Star. It gives the racer the same abilities as it does in the Super Bros Bros. series, giving the racer limited invincibility and running into any other racers would cause the other race to spin out. The racer would also get an increased speed.

Mario's body becomes rainbow-colored, he can run at high speeds, and is invulnerable to almost anything. Since Super Mario Bros. 3, Invincible Mario's jump looks similar to Samus Aran, in that they both curl into a ball and front-flip multiple times. 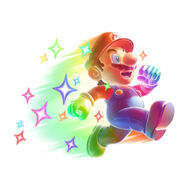 Invincible Luigi
Add a photo to this gallery

Retrieved from "https://fantendo.fandom.com/wiki/Invincible_Mario?oldid=2713293"
Community content is available under CC-BY-SA unless otherwise noted.