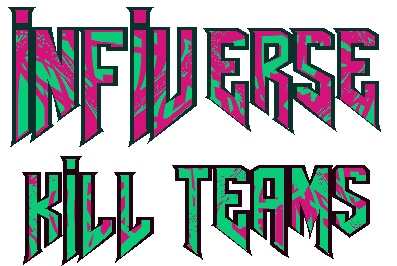 Infiverse: Kill Teams is an Umbrella Team-based First Person Shooter made by Bizuko for PC, Nintendo Switch, the V2 and the Pyrohedron. It takes place in the usual "Universe with a bunch of random shit for some reason." setting every Umbrella ever uses. What? You wanted more plot? This aint Fighters of Lapis son, we don't got that kinda talent! 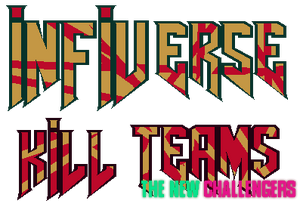 On the 1st of March 2020 the first Expansion Pack for the game, The New Challengers, was released. It featured many new characters with relations to those on the main roster, aswell as new Acolytes and Stages. Content from this Expansion Pack is denoted with a gold and red colour scheme over the pink and teal of the base game. 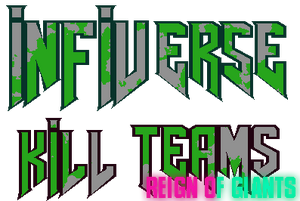 On the 29th of March 2020 the second Expansion Pack for the game, Reign of Giants, was released. Like the new ones it had new characters, Acolytes and stages but also brought in the new mechanic of XL Characters

The Infiverse is a chaotic universe comprised of paradoxical elements and dimensional travels gone wrong. It's unstableness however, makes it a great source of energy. This great source of energy is what has drawn many people to the Infiverse and caused many attempts to try and harness it. At the same time. So now on top of the usual mayhem there's an extra layer of bullshit because of capitalism. God damnit.

Kill Teams is a 6v6 FPS in which the player can select from a variety of characters (called "Marauders" because every game like this needs their own fucking name for the roster members.) And use them to complete objectives. Objectives are usually along the lines of "Capture this Area", "Steal this Thing" or simply "Shoot the other Bastards". These objectives grant Objective Points to whoever is completing them which will work towards that character's Objective Ability aswell as being totalled to decide who won. Every Marauder has a unique(ish) kit of weapons and abilities they use to fight.

XL Marauders are a new form of character introduced in Reign of Giants. They have 30 second cooldowns between spawns and thus can't be played regularly, instead being used periodically between regular character usage due to their extreme power and high damage potential. As the name implies they are much bigger than normal Marauders.

Teams don't have any gameplay effect except that the Maruaders in each team will have special voice lines when fighting against or along side eachother. Their backstories also entwine but thats not gameplay so shhhh.

Retrieved from "https://fantendo.fandom.com/wiki/Infiverse:_Kill_Teams?oldid=3140438"
Community content is available under CC-BY-SA unless otherwise noted.