“I can taste your terror, child. All that anxiety and doubt... It's delicious.”
— Infinite, Sonic Forces

Infinite is a Sonic the Hedgehog series villain first appearing in the 2017 game, Sonic Forces. He is part of Dr. Eggman's league of allies assembled to help him dominate the world and destroy Sonic the Hedgehog once and for all.

Infinite led a group of bounty hunters known as the Jackal Squad, who fought against Dr. Eggman for the Phantom Ruby. After a battle, Eggman convinced him to join his army, and Infinite accepted the offer.

He soon met Shadow the Hedgehog, who took him down with ease, insulting him and calling him weak. Enraged, Infinite decided to cover up his old identity and use the Phantom Ruby to greatly enhance his power. He helped Eggman take over the world and imprison Sonic the Hedgehog, with the help of summoned illusions of Zavok, Shadow, Metal Sonic, and Chaos.

Infinite keeps himself mysterious due to the new identity he adopted after fusing himself with the Phantom Ruby. He can be cruel and sadistic, although in his past life as a Jackal Squad leader, he did seem to care about the men in his squad, and angrily confronted Shadow the Hedgehog over their destruction before battling him. He takes great pleasure from fear and torment of others, allowing The Avatar to live just so he could hear them scream.

Infinite's most defining character trait is his inferiority complex, with his most famous line being a shrill "I'M NOT WEAK!". This comes from his encounter with Shadow the Hedgehog, who defeated him handily in their first encounter. He was then desperate enough to fuse himself with the Phantom Ruby, completely discarding any trace of his old identity, to the point where he refused to show his own face.

His inferiority complex has led him to seeking more and more strength, and even expressing disgust at Eggman for calling a retreat, seeing it as a sign of weakness. He also sees life through a Darwinism lens, stating that the weak only exist to be vanquished by the strong.

Infinite is described as powerful, although that can be put to question as the Avatar seems to defeat him very easily and most of his powers revolve around the illusion of power. He does however, seem to have very great speed that far excels Sonic's own. He was also able to kill E-123 Omega and take over his corpse with great ease.

The illusions he creates using the Phantom Ruby do seems to have "mass and form" but no "heart and soul"; any injury created by these beings to cause actual injury despite being described as "illusionary injury". His most frequently used power is to summon a bunch of crimson cubes, of which teleport his foes into a dimension where they are assaulted by objects of his power.

He can also create "Null Spaces", which are seemingly inescapable voids in space-time that function similar to that of a black hole. Using enough speed though, they become escapable rather easily. He can also teleport and disperse his body into cubic forms, fire energy blasts, and levitate.

A reimagined version of Infinite appears as an antagonist in this film. He is the one who summons most of the other villains from the past of the Spursverse.

Infinite appears as one of the main antagonists (with Mephiles the Dark) and is the right-hand of the Dark Empire.

Infinite appears as a boss in Super Smash Bros. Calamity, where he is fought in a virtual world.

Infinite appears as a primary antagonist in Super Speedstar RPG, assisting Eggman in taking over Mobius. He appears in the prologue, although more details are given by Shadow in Chapter 2, where it's explained that he used to be weak when Shadow first encountered him, but due to the Phantom Ruby's powers, he is basically unstoppable. He demonstrates his power by destroying the Resistance's headquarters and seeming to kill Knuckles and Rouge in the process. Shadow, the Avatar, and Omega attempt to pull the Phantom Ruby off but fail to do so, retreating and sending the Avatar to find Sonic.

Infinite is a playable character in Crimson Squads. He has three main ways to attack:

Infinite as he appears in Sonic Forces 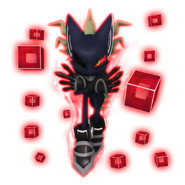 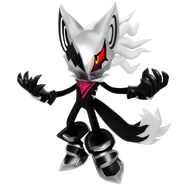 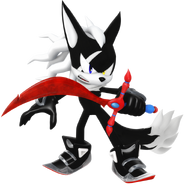 Art of unmasked Infinite by Nibroc-Rock. 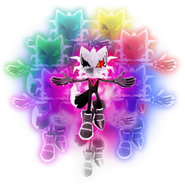 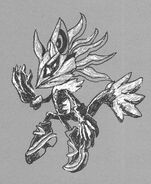 Retrieved from "https://fantendo.fandom.com/wiki/Infinite?oldid=3213881"
Community content is available under CC-BY-SA unless otherwise noted.