It evolves from Monferno starting at level 36. It is the final form of Chimchar.

Infernape is a bipedal, primate-like Pokémon that is primarily reddish-brown with sections of white fur on its chest, head, and lower legs. Several gold markings adorn its body: swirled, circular ones on its knees and shoulders flame-shaped ones on the back of its hands, and a stripe around its back that forms two swirls on its chest. On top of its head is a large flame, which is never extinguished. Infernape has an orange, rounded muzzle, long, round ears with blue inside, and a red ridge over its eyes. The eyes themselves are blue with yellow sclera. There are five blue digits on both its feet and hands, and it has a long tail. This quick Pokémon practices a unique kind of martial art that involves all of its limbs. This style uses fiery punches and kicks as well. 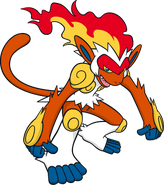 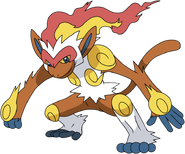 Infernape's original artwork from Pokemon Diamond And Pearl Anime
Add a photo to this gallery
Retrieved from "https://fantendo.fandom.com/wiki/Infernape?oldid=3200775"
Community content is available under CC-BY-SA unless otherwise noted.