“And now you come to seek MY help, after nearly ending MY life.”
— Inferadness

Inferadness is a major villain and deuteragonist from the Teardrop series. He's a Jester, with the power to control fire, and the Prince of the Sacred Flames.

Inferadness is shown to have psychosis, and to be extremely agressive, but yet maintaning a calm and collected demeanor, only cracking up a smile while killing someone. Hiding his face behind a mask, he's also known to want to hide his emotions to everyone, trying to keep various layers of a complex personality as to confuse everyone to what his true self is.

He is shown to be sadistic, and some times ruthless, but sometimes kind and caring for his fellow Jester peasants: he would risk his life and kill for them, even if it isn't the best method, and his motives to try and invade Atlantica were just for Jesters to be known again and appear in history.

Inferadness' and Teardrop's relationship is quite complex: however, one fact is that they hate each other to dead, and will try to kill the other if the opportunity comes. Teardrop despises Inferadness for being a psychotical, crazy murder, and Inferadness despises Teardrop for how he looks at life. Albeit Teardrop might seem a better person than Inferadness, Inferadness is in the truth more positive than him, caring for his peasants.

Borealis and Inferadness don't really care about each other: they prefer to stay away, though, as their personalities are highly contrasting. However, Inferadness shows some interest in knowing more about her, and both share a high intelligence.

After Inferadness nearly-killed Ayla and him, Rufus started to have a grudge against him. However, soon, when he sacrificed himself, Inferadness started to have some respect for him, admiring his courage, and looking at how they had some things in common: they both were orphans, and they both tried to hide their sadness.

Ayla and Rufus are completely enemies: Ayla, being kind and caring, cannot withstand being with him, and Inferadness hates how she always tries to keep a good demeanor and never show her true anger. They both clash a lot with each other. 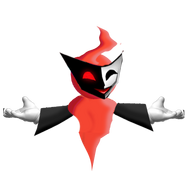 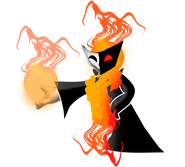 Teardrop 2: Journey through the Sea

Teardrop: Forgotten Desire
Add a photo to this gallery
Retrieved from "https://fantendo.fandom.com/wiki/Inferadness?oldid=2033237"
Community content is available under CC-BY-SA unless otherwise noted.