Incinerator is a playable character in Sparkplug. He believes he is "radical" and bases his entire identity around this. Most of his attacks are based on explosions.

Incinerator is a large grey robot who is somewhat humanoid. His head has a single, large black eye with a long orange iris. A thick metal pipe connects the head with both the upper and the lower torso. The upper torso includes large machinery visible in the center, that is protected from the sides with two metal trapezoids. Connected with metal rods are his robotic hands that look like flamethrowers or rocket launchers. His lower torso and his base is octagon-shaped. He does not have legs, instead using wheels to move around.

Incinerator thinks he is extremely cool, and almost constantly shows off because of this. He is also a bully to robots he does not consider "cool enough", especially Watchword. However, Incinerator likes to insult people who he considers cooler than him in order to make himself feel better (as shown by him calling SentROB edgy). He is actually kind of a coward. Operative is one of the few robots he respects, and often asks him for protection when he's afraid. Most of the robots don't like him very much because of how much of a jerk he is.

Incinerator is the slowest character in the entire Sparkplug cast, but this does not stop him from being a threat. Indeed, he deals some of the highest damage in the game, and is pretty bulky to boot. He gets tactical use with his Landmine attack, too, which he can detonate at will. He can also shoot flames from his blasters if enemies get too close, and he can shoot rockets at far-away enemies. Finally, he can show off his "radicalness" by increasing his attack for a few seconds, which makes him even deadlier. 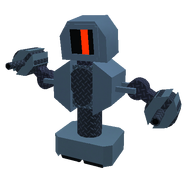 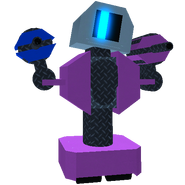 Reference sheet for Incinerator, showing various angles and details about him. 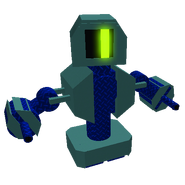 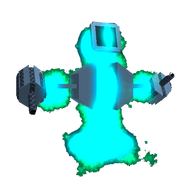 Plasma Incinerator, a skin of Incinerator in Sparkplug.
Add a photo to this gallery

Retrieved from "https://fantendo.fandom.com/wiki/Incinerator?oldid=2634493"
Community content is available under CC-BY-SA unless otherwise noted.