Imaginative, also known as Imman Zyborh, is the true antagonist and final boss of Sparkplug. He used to be a human, but has since converted his mind into data and then put it into a robot. He is the father of CeROBral and SentROB and is a scientist engineer. His influence is seemingly big out of the bases Sparkplug takes place in, seeing has his technology has affected at least one whole city. Although he appears to get destroyed in the final chapter, a secret ending cutscene reveals he in fact survived. He created Operative and at least one brain extractor.

Imaginative is a very tall robot, towering above everyone else in the Sparkplug cast. He has a humanoid shape. His head has a jaw with three pairs of square teeth, and said jaw is connected to the head with light grey pipes. He has two metal rods that go above his head connected to his eyes, which are circular. They have black sclera, with glowing yellow irises and purple pupils. He has three jester-like horns. He has wires coming out of the back of his head that aren't connected to anything else, simulating hair. His neck and most of his torso is spine-like. He has a metallic structure for his upper torso and shoulders, which are connected to more spine-like wires. His left hand from his perspective is a magnet-like hand, with one "finger" being red and the other being blue. There is a purple orb at the center of the hand's base as well. His other hand is a blaster with seven "shooters", six small ones at the side and one large one at the center of the blaster that glows yellow. He has a grey kilt-like pelvis with stubby legs. His feet are tall and mostly square-shaped, except the toes which are light grey trapezoids.

Imaginative is shown as a wicked, manipulative robot with a large ego, especially relating to his own creativity. He seems to like jokes, maybe too much, and is apparently obsessed with jesters considering he himself looks like one and made the setting of Sparkplug entirely jester-themed. He had no qualms about attempting to kill his own children and did not care for them anymore by the end of Sparkplug. He was also happy to tell Doormat that he was in truth a brain extractor. Apparently, he does slightly care about other people outside the Sparkplug cast, as he is shown to have some link with F0R3(A57, and points out that people benefitted heavily from the technology he did. The fact CeROBral and SentROB did not suspect him for their cybernetic fates suggests he might've not always been this crazy. He also used to have a wife, but she mysteriously disappeared one day, which may be one of the reasons why Imaginative went crazy.

Imaginative could likely give himself nearly as much powers as he wants, seeing as he has access to all of the technology the Sparkplug cast is made of, but in the final boss battle, he is shown with five different attacks, including a crazy dance that allows him to boost his own stats, the ability to attract and pull away other robots, the ability to shoot six small orbs from his gun and also the ability to shoot a massive laser from said gun, and finally, the ability to basically instantly KO any robot by crushing them with his claw. He was also able to summon bosses before his boss battle and was able to completely change the appearance of the base most of Sparkplug takes place in, taking a hour or two to do so at most.

Strategic Landmine of the Damned's story revealed multiple details about Imaginative's backstory. He was a genius in robotics, and made many different machines. He had a facination with the mind in particular, with most of his creations having a link with the mind in one way or another. Operative, for example, was created as a test for a sentient AI. He wanted to make his "vision" come true; a world where humans were turned into cyborgs and peacefully cohabited with robots in a mechanical utopia. He worked with a female assistant named "Orbitius" who wanted to prove various paranormal concepts were in fact real. He has two sons and a wife.

Eventually, he created a mask of sorts that would transfer a person's mind into a robot as long as the mask wasn't taken off. Imaginative had planned to use this mask on himself, but it was stolen by Sener Zyborh for unknown purposes. He had to create an extra copy of the mask, but he botched said copy, so when he used it, his sanity started to lower. Also around this time, Imaginative's wife mysteriously disappeared; Operative suspected Orbitius of having a role in this disappearance, but he had no proof. This seemingly made Imaginative outright insane.

He made various "protocols" with Orbitius, most if not all of which were illegal and immoral. Therefore, he made his house float up in the sky as a "Flying Fortress" that would eventually become the Base in Sparkplug. He also let Operative in charge of the facility, although he was secretely still controlling it. The first protocol, Protocol A, turned his younger son Celeb into CeROBral, with Imaginative controlling Operative to use a brain extractor on Celeb. The second one, Protocol B, involved F0R3(A57, and resulted in her becoming a ghost possessing a machine. Protocol C, which was only enacted much later on, turned his elder son Sener into SentROB, although this protocol's events caused panic all over the Base ultimately resulting in Operative having to partly wipe the memories of his robots. Finally, Protocol D involved Operative destroying himself so Imaginative could fully take over.

After Protocol D, however, the rest of the Sparkplug cast teamed up to take him down, causing him to eventually lose control of his house. However, the secret ending of Sparkplug reveals he is still monitoring it. What he is planning to do next is unknown. 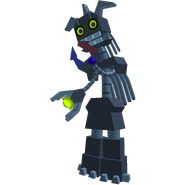 A reference sheet of Imaginative, showing various angles and details about him.
Add a photo to this gallery

Retrieved from "https://fantendo.fandom.com/wiki/Imaginative?oldid=2634571"
Community content is available under CC-BY-SA unless otherwise noted.