Il Piantissimo is a dark-skinned man disguised as a Pianta that the player must race in Super Mario Sunshine. He could be raced in Gelato Beach, Noki Bay, and Pianta Village.

He appears in Super Mario Sunshine disguised as a Pianta. He can be raced in the 5th levels of Gelato Beach and Noki Bay, and in the second level of Pianta Village.

When Mario races against Il Piantissimo, the two must head to a flag that represents the finish line. If Mario wins, he gets a Shine Sprite, then completing the mission. However, Mario will lose a life if Il Piantissimo finishes first. Also, if the player replays a completed Il Piantissimo episode, Il Piantissimo will be more difficult to beat, as he will finish the course with the player's previous time. However, Il Piantissimo cannot use any tactics involving F.L.U.D.D..

Once the game is beaten with one hundred and nineteen Shine Sprites or less, the ending screen will show Il Piantissimo finding Bowser Jr.'s Magic Paintbrush. This alludes to the possibility that he took it.

Piantissimo is very overconfident, and finds himself superior to others. According to various locals at Pianta Village, he is considered a rogue, a creep, and not related to the Piantas. This could show that due to his attitude, he is left alone and barely challenged, adding to his superior personality with no one to go against it.

Appears in Mario Kart Havoc as a racer. 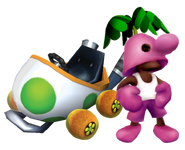 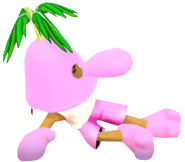