“My infinite math-mind paths will surely outtake you in battle, Mario! Now hop on my greatness and feel yourself be defeated!”
— Iggy Koopa, Super Mario Crystalline World

Iggy Koopa (known as Hop Koopa in the cartoons) is one of the Koopalings, the fourth-oldest of the canon eight Koopalings. Along with Ludwig, Iggy is the smartest of his siblings, capable of conducting experiments and building mechanics better than anyone else. Iggy mainly relies on his superior intelligence to fight many challenges, but he also uses his speed as well, being the fastest Koopaling.

Iggy has always been shown with a tall type of hairstyle, four teeth (two big ones and two small ones, similar to Larry), and a yellowish body color. His stomach is a lighter color than his body, and has stripes on it. He also has a pair of glasses (probably to enhance his mad-scientist personality), and a green shell with spikes on it.

During these years, Iggy was much shorter. He had a rainbow mohawk (similar to Lemmy's, except a little less mohawk-like). Due to this appearance, he was often difficlt to tell apart from Lemmy. Despite being younger than him, due to his smaller size during this time period, he was often mistaken for being a twin to Lemmy. This idea was used for the Super Mario cartoons.

During this time period, the only thing that differentiated him from Lemmy was his glasses and the fact that he has teeth.

Iggy now has much less resemblance to Lemmy. His body color is now more yellow than light brown, and he is much skinnier, as well as taller, than before. He now has a plant-like hairdo, instead of the rainbow mohawk. He also now has purple rings around the spikes on his shell.

Iggy is shown the be demented (as said in the game Super Mario World), as well as crazy, and maybe even mentally deranged. He is intelligent, and this factor, when put together with his crazy personality, makes him have the appearance of a mad scientist.

Iggy, like Ludwig, creates inventions, although Iggy's rarely fail while Ludwig's often fail. Iggy must also be a good pet owner, as he has his own Chain Chomp that obeys his orders, although this may just be so because Bowser made the Chain Chomp do so.

Iggy's main abilities include shooting from his magic scepter and spinning in his shell, although the latter is more of an instinct rather than an ability. His magic scepter also sometimes shoots fiery blasts that summon Magmaarghs when they make contact with lava.

Iggy can also run upside down, as seen in NSMBU. He is also the fastest among the Koopalings, running fastest as well as spinning inside his shell fastest.

Iggy has a Koopa Clown Car that he rides on sometimes.

Lastly, Iggy owns a Chain Chomp, which he rides in some battles to try and kill the player.

Mario Singalong Down Under!

Iggy made his debut in the Mario Singalong! Series in Mario Singalong Down Under! where he was an unlockable character to unlock him you had to complete story mode twice and have sung "Love is in the Air" by John Paul Young in Karoke mode at least once.

Super Mario and the Glowing Diamond

Iggy Koopa reappeared along with the rest of the Koopalings in Super Mario and the Glowing Diamond. He conquered and attacked World 1: Mushroom Plains. In battle, Iggy will throw balls on a tilting platform. To defeat Iggy, hit him with fireballs or jump on him rapidly to send him into the lava, defeating him and giving up the key to World 2: Sea of Sand.

Iggy appaered as the first boss.

Iggy Koopa is the boss of the 8th World, Crazed Sky. Unlike the other Koopalings, he become even more bigger after eating a Giant Mushroom, nearly as tall as Bowser's giant form in New Super Mario Bros. Wii, and gained fire breathings, bigger strength and immune to fireballs and punches.

Beside strong items, the only way to defeat him is to get a Propoller Block, press Jump twice, make sure you are above of him and use a Ground Pound. To this 6 times and he is finished.

Iggy makes a surprise appearance at the end of the Nostalgic Area in Lets-a-go, Mario. His personal minions are Grand Goombas, Blarggs, and Chain Chomps. In battle, he is battled on a raft over lava being pulled by a Chomp Shark. He can throw bouncing balls at the player, which can be stomped, picked up, and thrown at him. He can also spin around like a tornado and twirl around the platform. Being hit by this will throw the player away from Iggy and possibly into the lava below. He can also spit circular fireballs that act just like the Fire Mario's fireballs. He can also make his hair spear-shaped and dash into the player. If he is stomped near the end of the platform when he does this, he will plummet into the lava and the player will instantly win.

If Iggy is not defeated in a certain amount of time, the Chomp Shark falls down a lava waterfall, causing the players to plummet to their doom. Before this happens, Iggy jumps onto a platform high enough so that not even Luigi can reach it.

He reappears with the other 6 Koopalings in HURRY UP! in the last part of the stage, again as a boss. He is the fifth Koopaling to fall off of the Koopa Clown Car. There, he attacks by creating magic blasts that can spawn a random enemy when they touch something. Like his brothers and sister, he falls off after he is hit by one of his own projectiles after it was reflected by Tornado Mario.

Iggy in this game is the boss of the world 3: Tomato Jungle. There he is one of the two Koopaling that can be fought after than defeating Wendy in World 2: Coffee Desert, the other being Larry. Iggy will cling to some vines on the top of the battlefield, and he will launch some magic orbs.

Iggy reappears in this game as the boss of Iggy's Artillery Castle, in World 7: Great Stone Mountains.

He is the fifth Koopaling to be fought.  He'll turn giant and chase you, knocking over any walls in his way.  He can throw debris and enemies at you, so watch out.  The course is not endless, because at the end there is a wall.  You have to defeat him before you reach that wall, so you have to grab a large rock and throw it at his face.  If you're Waluigi, you have to grab an ice flower and throw ice cubes at him.  Once you hit him with a large rock three times or throw 15 ice cubes at Iggy, he'll be defeated and will fall through the floor into a pit of lava.  Now you can pass to Platinum Maze.

Iggy is the boss for Red Grasslands in Super Mario 3D Overload. He is the first boss. He takes 3 hits and has a wand. His wand can shoot out magic. That's it. When he is jumped on, He goes in his shell and spins left and right. After he is jumped on once and rolled around, the floor shakes. This does nothing, however. After you defeat Iggy, the area of floor he's above breaks. After that, you get the red rainbow shard.

Iggy appears as the mid-boss in World 6. He will constantly shell spin throughout the fight, using a jump attack that sends stars along the ground, stunning you. You have to use the hammer just as Iggy approaches to knock him out his shell, then stomp on him. Three stomps will win the battle.

The player has to be careful as each phase is timed by a Time Bob-Omb - if it explodes, segments off the sides of the arena fall off.

Iggy is fought as the mid-boss of World Mushroom, a secret world, where he is sent by Bowser to cause mayhem in the Giant Land of the past.

Iggy retains similar tactics to his tower battle in New Super Mario Bros. Wii, and even has a similar arena to match. However, after this, he is not seen again in the game.

Iggy appears in New Super Mario Bros. Lambda along with the other Classic 7 Koopalings. He is the Boss of World 4, Huckit Shores.

Iggy appears as a costume for Bowser Jr. When selecting the character hold down the left control stick downward to turn Bowser Jr. into Iggy.

His Super Mario Bros. 3 artwork without his scepter.

Iggy Koopa with a Chain Chomp

Artwork of Iggy in a Chain Chomp cart.

His new look, in the style of Super Mario Bros. 3.

His old look, in the style of New Super Mario Bros. U.

Another classic Iggy Koopa (by shadowsilverfox12)

Another classic Iggy Koopa by DocNewfound

His Super Mario World artwork in his SMW sprite colors and design.

Iggy Koopa in 2D (Made by Gabriel)

Giga Iggy Koopa
Add a photo to this gallery

Comparison between original and recent Iggy 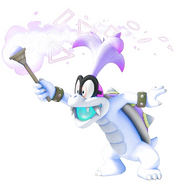 His emblem for the Mario Kart series. 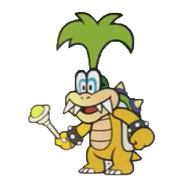 Iggy Koopa Mii
Add a photo to this gallery
Retrieved from "https://fantendo.fandom.com/wiki/Iggy_Koopa?oldid=3343134"
Community content is available under CC-BY-SA unless otherwise noted.