Icionna is a Dual-type Ghost/Ice Pokémon introduced in Pokémon Heaven and Hell Versions. It is one of the final forms of Frozdren, the other is Fogurai.

Icionna is an incarnation of a falling icicle that was transformed into a beautiful pokémon. However, it has a dark side that the owner wasn't expected.

Icionna, like Frozdren is based on Tsurara-onna of Japanese Mythology, which is often confused with Yuki-onna. Mega Icionna's hair-like clothes might be based on a old European belief that women with long hair where always the targets of Incubi, that was later evolved as an idea for witches using their hair for magic.

Icionna is a mix of Ice and Donna (italian for woman). 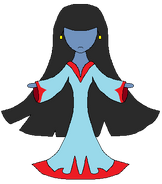 Icionna's artwork for Pokémon Heaven and Hell
Add a photo to this gallery
Retrieved from "https://fantendo.fandom.com/wiki/Icionna?oldid=2710272"
Community content is available under CC-BY-SA unless otherwise noted.