In Super Mario Galaxy, Ice Mario had the ability to freeze any kind of liquid - be it water or lava - and skate across it, leaving behind hexagonal platforms of ice as he travelled across its surface, though these would eventually dissipate. In addition to this, Ice Mario could freeze water spouts and waterfalls, allowing him to traverse areas he may not have been able to before. Surprisingly, despite being made of ice, he also had an immunity to fire attacks, such as the fireballs thrown by Magikoopas. Ice Mario, much like Fire Mario was in this game, could only be used for a short time, and Mario would return to normal once time was up. This form has also become known as "Frozen Mario", though Nintendo has only referred to it as "Ice Mario".

Starting with New Super Mario Bros. Wii, Ice Mario became a sort of parallel to Fire Mario. Instead of being able to walk on water and lava, he could instead throw ice balls. Like Fire Mario, only two can be on screen at a time. Though the ice balls travel slower and will disappear after two bounces, they will freeze enemies. In this state, they can be picked up and thrown across the water, where they will damage enemies before hitting a wall, shattering the ice and defeating the frozen enemy. Some enemies, like Piranha Plants, cannot be picked up after being frozen, and others such as Banzai Bills cannot be frozen at all. 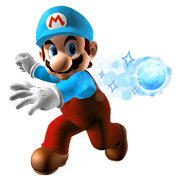 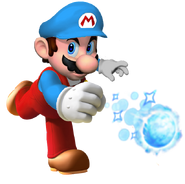 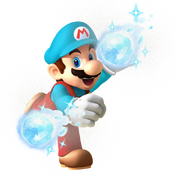 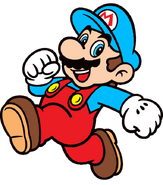 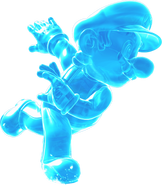