Start a Wiki
“That's an Ice Flower. Use it to freeze enemies. The very fact that you found one is cool!”
— Kooprus, Paper Mario: Boom Boom's Revenge


Ice Flowers are power ups in the Mario series that turn Mario or Luigi into Ice Mario or Ice Luigi, either allowing him to skate and freeze water solid, or to shoot balls of ice, much like the Fire Flower.

In New Super Mario Bros: 3, ice flowers allow you to throw iceballs that freeze enemies and lets you freeze the seas and skate on top like the Frozen Mushroom.

With this flower, you can freeze enemies and skating on ice too, for awhile.

If the player gets an ice flower, they are able to shoot ice balls to freeze enemies and freeze water to walk on it.

The Ice Flower reappears in this game. Mario turns to Ice Mario for a while, then turns back to Super Mario. Like real games, Mario could throw Iceballs, and freeze enemies. Like New Super Mario Bros. Wii, Mario or Luigi Could carry any enemies if they are frozen. The durability is 20 seconds.

The Ice Flower allows you to throw iceballs and freeze opponents so they cannot move for a few seconds. It also lets you do an Icy Slam Dunk, which has more power than a normal slam dunk. Uncommon.

In Super Mario 3D World the Ice Flower returns. When Mario or Luigi shoot Iceballs they will bounce off of walls like Fireballs. It can freeze smaller enemies like Koopas and Spinies but not Sledge Bros. and Thwomps and bigger enemies. The Ice Flower appears in Crazy Maze Cave, Blooper Bay, Koopa CIty, Cool Crystal Caverns, Gloomy Boardwalk, and Snowman Valley. It can also be bought at Toadette's Shop in Toad Town, like other items.

In Super Mario Bros. V Ice Flowers return but this time there as common as Fire Flower. It is white this time and it gives all of the powers of the Super Mario Galaxy Ice Mario.

The Ice Flower is set to appear in Super Mario 3-D Galaxy. It allows Mario to create ice platforms and shoot ice balls for a time limit of 30 seconds.

The Ice Flower appears as one of five power-ups in the Wii U/3DS title, first unlocked on Yoshi's Island. It allows the plumbers to shoot ice balls that freeze enemies (which can then be picked up and thrown), freeze lava and water, break targets with an ice-cube-symbol on them in order to find secrets, and put out fire. While using it, the plumbers gain extra protection from ice-based attacks and are impervious to frigid waters and poison. However, the flower makes them much weaker to lava and fire-attacks. Finally, the power-up also provides the plumbers (except for Luigi) with better traction on slippery surfaces. Mario's ice balls shoot forwards with no other effects, Luigi's ice balls function like Zelda's Din's Fire in Super Smash Bros., Wario's ice balls function like Samus' Charge Shot from Super Smash Bros., and Waluigi shoots out ice-crystals instead of ice-balls, which kill enemies instead of merely freezing them.

The Ice Flower is a new Bros. Attack introduced in Mario & Luigi: Sage Quest, being one of Luigi's Bros. Attack, which uses up 8 Bros. Points. It is obtained by finding all 10 Attack Pieces in Bittercold Isle. It acts similar to how the Fire Flower works in Mario & Luigi: Bowser Inside's Story and Mario & Luigi: Paper Jam, and is powerful against flaming creatures.

Ice Mario can shoot and freeze enemies in place. Then, he can pick them up and throw them or use them as a platform. 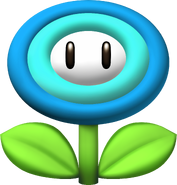 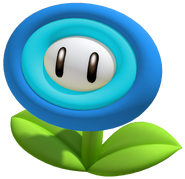 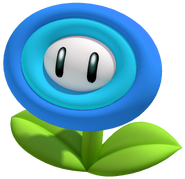 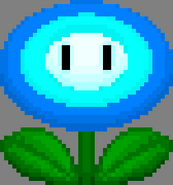 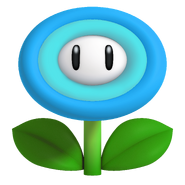 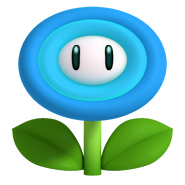 Ice Flower from Mario & Luigi: Sage Quest.
Add a photo to this gallery
Retrieved from "https://fantendo.fandom.com/wiki/Ice_Flower?oldid=2924948"
Community content is available under CC-BY-SA unless otherwise noted.