Popo and Nana, better known as the Ice Climbers, are two young children who love to climb mountains and the main protagonists of Ice Climber. They mainly climb the Infinite Glacier, as it is the largest mountain in the world, and the two like a challenge. They usually assist each other in climbing the mountains, and they both defeat the enemies that rest on the Icicle Mountain they often climb. Although the Ice Climbers have only had a single game, they have made many recent appearances in other series, such as the Super Smash Bros. series.

The Ice Climbers appear to be fairly-identical in appearance. Both are young children and their bodies are covered by large parkas, leaving only their faces visible. Their faces both consist of black, oval-shaped eyes and a simple mouth, with their cheeks consistently rosy from the cold they have to endure from their climbs up icebergs. In Ice Climber, the only difference between Popo and Nana was the colour of their clothing: Popo wore a blue parka whereas Nana a pink one. For their Super Smash Bros. appearances they retained their simple designs - although Popo's clothing was changed from a light blue to more of a purple colour - and they were both also given brown hair. While most of their hair is covered by their hoods, their bangs are spiked down across their foreheads, and Nana appears to have much longer hair than her male counterpart.

In artwork for the original Japanese release of Ice Climber, both of the Ice Climbers were depicted with curly hair of a golden colour, and large blue eyes.

The Ice Climbers will be appearing in the upcoming game Balloon Bomber as main characters. Not much else is known, but they are confirmed to be going to Balloonberg Mountain.

The Ice Climbers will once again do what they do best in Ice Climber 2.

They are they only playable characters in the Wii U game, Ice Climbers Blizzard. They climb some new mountains at Mt. Winter Resort, make some new friends. A blizzard roles in, and they get into a race to get to the top first.

The Ice Climbers make an appearance in Jake's Super Smash Bros. as playable characters. The return from their previous Super Smash Bros. appearances with few changes - their moveset has had changes to make it more similar to its Melee and Brawl appearances then their Ultimate one, although the two play nearly the same as they did previously regardless. While they are the sole playable representatives of the Ice Climber universe, the Condor once again brings them on-screen for their entrance into battle, and the orange bird also makes a cosmetic appearance as part of their Final Smash, Iceberg, and the Polar Bear appears as an enemy in the game's Smash Run mode. In addition to them, the Nitpicker enemy also has a trophy in the game.

They are victims of the Kirthar's Snap Finger.

The Ice Climbers returns as DLC characters from Season Pass 3.

This time, there's no penalty for knock-out Popo before Nana, instead, you can knock-out any of them with no problem, if one of them are out, the other will be in so much trouble. 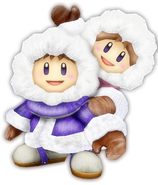 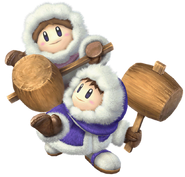 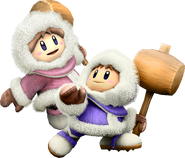 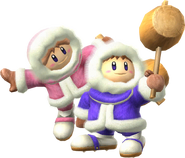 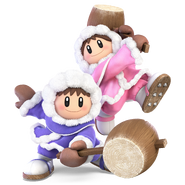 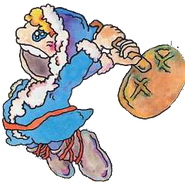 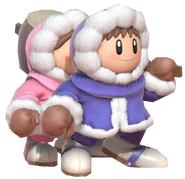 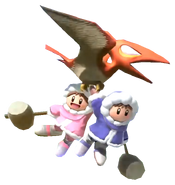 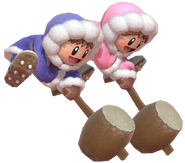 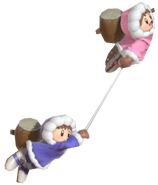 Add a photo to this gallery
Retrieved from "https://fantendo.fandom.com/wiki/Ice_Climbers?oldid=3242426"
Community content is available under CC-BY-SA unless otherwise noted.