Ice Bros. are a type of Hammer Bro. that can throw Iceballs at Mario to freeze him, they are the opposite of Fire Bros. which as the name suggests throw Fireballs. Ice Bros. made their first appearance in New Super Mario Bros. Wii to go with the Ice Mario Power-Up. Since their debut appearance they have become a regular enemy in the Mario (Series). They appear in many ice or snow levels trying to freeze Mario. Their Iceballs can also freeze enemies.

Ice Bros appear as enemies in Super Mario RPG: The Eight Shining Stars. They have 160 HP and 4 defense. Their Iceball attack deals 6 damage four times. They're located in Freezie Castle.

Ice Bros. make their 3D Super Mario game debut in Super Mario 4D World. They appear naturally in 3 unknown levels or when any Hammer Bros. family member absorbs an Ice Flower. This means that an Ice Bro could appear in any level where another Bro appears. 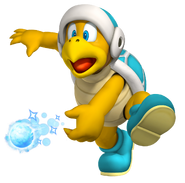 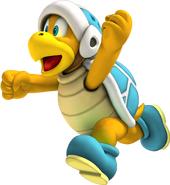 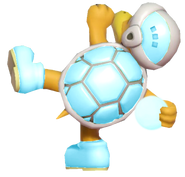