IPenguin 3DS is the upcoming sequel to iPenguin (Game). It will be released in November, 2011 for the Nintendo 3DS. The game follow Speedy, Climber, and Petunia in a new quest to defeat the new threat, Canine.

Speedy, Climber, and Petunia are walking toward iPenguin, ready to start their day at work, when suddenly, they are bombarded by canonballs.

They look up and see Agent P. on a giant airship. Speedy angrily runs toward it and jumps up. he land s on the ship, followed shortly by Climber and Petunia. Agent P. laughs, and starts to move his hands around. The air mysteriously takes the form of a spiral, and moves around, fastr and faster. Agent P. smiles and moves his hands forward.

The spiral of air spins forward and strikes the trio, sending them flying. Professor Dune is seen looking out of his office as the three penguins fly overhead. He sighs, and looks at down at Agent P. with an angry glare, and pulls something out of his desk.

The three penguins land near Pengau Cave, and strugle to get up. Speedy notices something shining inside the cave, and goes to investigate. Inside, Speedy sees a strange rectangle, barely floating above the ground. The object flashes, and opens. Speedy picks it up, and sees the words "Hello Speedy" on it.

Shocked, Speedy fiddles around with it as Climber and Petunia arrive. He plays around with buttons and links until he comes across a message that says "Would you like me to help you defeat Agent Prince?". Speedy notices two buttones, one says Yes, and the other says No. Speedy discusses it with his friends, and clicks Yes. The 3DS flashes, and says "Then follow my instructions".

A strange purple character is seen to be walking towards Agent P.'s office on his airship. The figure opens the door, and greets Agent P.. He introduces himself as Canine, the misery master.

Agent P., intrigued, tells Canine to take a seat. Canine explains he has a strange power that will help Agent P. defeat Speedy and take over Pengville. Agent P. seems suspicious, but allows Canine to continue.

Canine explains the marking on his right arm were given to him by the dark gods. He tells Agent P. that he has a toxic power that these markings allow him to use. he demonstrates by charging up his arm, and sending a mist of green gas at a plant.

The plant shrivles and dies, while Agent P. is mesmerized. Canine grins, and follows Agent P. for a grand tour of his fleet.

Meanwhile, Speedy, Climber, and Petunia are told to go to Whisper Woods. They would find a penguin named Ana who will guide them through the forest.

The trio, confused and frightened, follow the indtructions, and go to the Whisper Woods, in hopes of finding a way to beat Agent P..

They arrive at the entrance to the woods, and a purple penguin introduces herself as Ana. She tells them to grab some knives to cut their way through the woods.

She says that beond these woods is a place so beutiful that even she can't describe it. Once they arrive at the so called beautiful place, they see Thug, and an army of Ariships. The entire place is covered in dust and smoke, and Thug says he has been expecting them. he challnges them to a fight, and the heroes accept.

They defeat Thug, and destroy the Airships, returning the place to its former beauty. It is a beautiful waterful with fresh green grass, and bautiful flowers and other plantlife. Speedy notices something in the Waterfall, and runs over to it. He finds a chest, and opens it. There he finds a second 3DS. 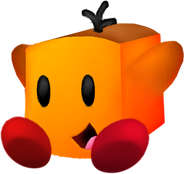 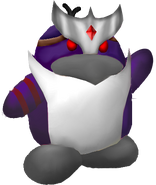 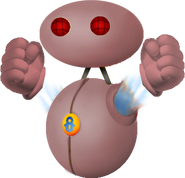 iBot
Add a photo to this gallery
Retrieved from "https://fantendo.fandom.com/wiki/IPenguin_3DS?oldid=2046983"
Community content is available under CC-BY-SA unless otherwise noted.