Start a Wiki
“What the heck is the meaning in all of this stupidity!? I feel like I am really surrounded by absolute morons!! ... But hey, at least I finally got my own rainbow colored shell I always wanted!”
— Hyperlight Bowser, Paper Mario: Stolen Worlds


Hyperlight Bowser is a light-powered version of Bowser, who become much more aggressive and moodier than he already is. This form debut in Paper Mario: Stolen Worlds as a giant boss confronted alongside Madame Mothana against Mario and his friends.

Similarly to Meowser and Dreamy Bowser, Hyperlight Bowser is obtained thorough a power source. In this case, he obtains this form after absorbing an excessive amount of light, causing a mutation on his body and caused him from getting slightly bigger up to becoming massive. It is unknown if absorbing an excessive amount of light will occur the same result on other Mario characters.

Hyperlight Bowser is essentially a light elemental version of Bowser, with his green skin and his chains around his arms and neck turning blue, with his yellow/orange body and hair becoming darker. His eyebrows and horns become slightly longer, and the sclera of his eyes become black with his irises becoming cyan.

His horns, spikes and claws become bright beige, with his belly and shell becoming rainbow-colored. Hyperlight Bowser even sprouts dark blue wings that have a rainbow-colored "fissure". His horns, spikes, claws and rainbow parts become much more luminescent when he gets angry or is preparing for a stronger attack.

Hyperlight Bowser is unable to use any kind of fire in this form, as he instead breathe a beam of light made out of multiple colors, which separates into seven smaller beams when it hit the floors. He can also shoots arrow-shaped light projectiles and firing a strong wind with his wings, and ground pound to sprout out pillar of lights around him that stays for several seconds.

Unlike multiple of Bowser's forms, Hyperlight Bowser is notably much more moody than he already is. He have a tendency to go from going very angry to very delightful in a manner of seconds, but he also become much more aggressive, getting into a fight at even at the mildest provocation. This makes Hyperlight Bowser particularly violent even toward his own minions, and as a result many people doesn't want him to stay in this form for long.

Hyperlight Bowser, [Unknown] HP, [Unknown] Defense Power, Light elemental. Bowser is even more aggressive and moody after absorbing a massive amount of light, transforming him into the deadly Hyperlight Bowser. Weren't it for attracting Madame Mothana with intense light, the heroes would be in a severe trouble against this colossus troublemaker!

Hyperlight Bowser appears in this game first as a Major Boss alongside (and against) Madame Mothana in the Mass World, and then as an unlockable Omega Move for Bowser to use. He attacks with a breath of rainbow-colored beam, light elemental arrows, strong cutting wings and a ground pound of pillar lights.

As an Omega Move, Hyperlight Bowser can only use his Rainbow Breath among the new moves he can use, but he have his other moves from the original Bowser intact. He gains a +20 Max HP, +5 ATK power and +3 DEF power for five turns until he reverts to normal Bowser. However, this comes with a weakness of having to spend two turns if he is flipped over instead of just one, making this form risky to use. If he is knocked out in this form, he cannot use the form again for the rest of the battle.

Hyperlight Bowser appears in Fantendo's Card Cataclysm as one of many boss characters. 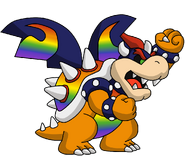 Official artwork from Fantendo's Card Cataclysm by Puddle.
Add a photo to this gallery

Retrieved from "https://fantendo.fandom.com/wiki/Hyperlight_Bowser?oldid=3205802"
Community content is available under CC-BY-SA unless otherwise noted.