You might be looking for the original Hugo Logia, who can be found here!

“Just shut the hell up already! How do you expect me to divine your damn fates when you keep chatting up a goddamned gossip hurricane?!”
— Logia, trying to see the future


Hugo Logia is a freelance bodyguard currently serving as the protector and secretary for a highly famous celebrity. In his spare time, he follows leads on obscure stories about a criminal organization called the Twisted Cross.

He is Omega Prime's version of Hugo Logia.

Logia is a giant Ursaring with a small tuft of untidy hair sticking out from the top of his head. The only clue of his Beorn heritage is is black eyes and white star-shaped pupils, which are usually hidden by his sunglasses. He dresses in a gray dress shirt, dark slacks, and a comically small tie in an ugly shade of mustard yellow. He is usually seen with a leather briefcase.

Logia is beset by anger management issues that, were he in any other sort of career, would probably spell his downfall. Fortunately, as a bodyguard, his rage is put to good use swatting aside anyone pestering his client. With no real reason to practice controlling it, Logia prefers to just let his temper roam freely. As a result, in the rare instances when he needs to calm down to access his psychic abilities, he often has trouble doing so. Logia also possesses no sense of humor, and will generally give a disgruntled look to anyone who tries to get him to laugh. That usually shuts them up quickly.

Though he prefers to focus on his job wherever possible, Logia does have some hobbies. Prior to becoming a bodyguard, he studied to become a psychologist. Though he put those days behind him, he will sometimes examine and silently diagnose the behavior of those around him when he needs something to do. He enjoys doing repetitive things, as they let him get his mind off of whatever's making him angry and focus his psychic powers, and so he will sometimes help others cook by chopping vegetables or grating cheese. His own food tastes are immensely varied, though he tends heavily towards sweet foods. He's especially addicted to tea with honey.

Logia is a giant, standing at a little over six feet in height. He boasts immense strength to match his looming physique, and his hands and feet end in claws that can cut through thin plates of metal with little effort. However, though he is incredibly powerful and undeniably dangerous, he lacks a proper fighting style, and will usually resort to flailing and lunging haphazardly to get the job done.

Though he shares the psychic powers of his New Fantendoverse counterpart, it does not manifest as telekinesis. Instead, Logia will sometimes receive brief trance-like glimpses of the future, with his control over the trances increasing as he grows calmer. This is an immensely powerful ability in general, but Logia's anger issues and rage-based fighting style make it cumbersome and unpredictable. As a result, it is usually not worth his time to try and actively use it in the middle of a fight. 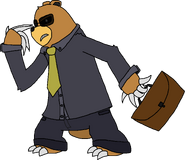 Logia's design in Fantendo Smash Bros. Omega
Add a photo to this gallery

Retrieved from "https://fantendo.fandom.com/wiki/Hugo_Logia_(Omega_Prime)?oldid=3155048"
Community content is available under CC-BY-SA unless otherwise noted.