Hot Wheels Stunt Track Challenge is an arcade racing video game based on the Hot Wheels toy automobiles line by Mattel developed by McDonalds Interactive with Starbreeze Studios and published by Square Enix. The game is a reboot of the 2004 video game of the same name, developed by Climax Racing and published by THQ. Announced in September 2013, it was released in November 2015 on Microsoft Windows, PlayStation 3 PlayStation 4, Xbox 360, Xbox One, Krusty Krab and Wii U. The game is a multi-crossover featuring characters from famous franchises including: SpongeBob SquarePants, The Fairly OddParents, The Adventure of Jimmy Neutron: Boy Genius, Super Mario, Star Fox, Sonic the Hedgehog, Pokémon, Digimon, Tomb Raider, Metal Gear, Ratchet and Clank, Jak and Daxter, Uncharted, Gears of War, and Halo participating in "Stunt Track Challenge".

Production started in 2005 after McDonalds Interactive was founded, but suffered development troubles and as a result, the game was put on hold. Development on the game officially started in 2011. After THQ was shut down in 2013, Square Enix was announced as the new publisher. The company contacted Starbreeze Studios to provide assistances with development. McDonalds and Starbreeze employed veteran actors Pete L. J. Dickson, Mariah Milano, and James Marsden as the hosts in the game's Game Show mode.

Stunt Track Challenge, like the original 2004 game, is a stuntman style arcade game that consists of drivers competing in stunt challenges and winning fast races to stay on the show. Sometimes, there are mini games with special tasks, usually involving collecting icons in a limited amount of time. However, the game features different aspects from the original; players can customize their vehicles with body kits, color, wheels, and rims. Some vehicles however, can only be played during the challenges, not the races in single-player, and cannot be modified except in multiplayer.

The game features the "Game Show" mode from Stunt Track Challenge (2004). Two types of races take place on one of 13 tracks and players compete to finish first. The game's 25 stunt challenges reward players for performing daring deeds by using the controller.

Pete L. J. Dickson, Mariah Milano, and James Marsden are the hosts in the Game Show, replacing Ryan Storm who was the previous host from Stunt Track Challenge (2004). There are 10 episodes instead of 6 from the previous game.

The game features an online multiplayer. It holds up to 40-player races and challenges on PC, PlayStation 4, and Xbox One.

The original Hot Wheels: Stunt Track Challenge was developed by Climax Racing and published by THQ and released on PC PlayStation 2, and Xbox in November 2004.

Creative director Harold Dallas thought about a multi-crossover experience for the game featuring characters from SpongeBob SquarePants, The Fairly OddParents, The Adventure of Jimmy Neutron: Boy Genius, Super Mario, Star Fox, Sonic the Hedgehog, Pokémon, Digimon, Tomb Raider, Metal Gear, Ratchet and Clank, Jak and Daxter, Uncharted, Gears of War, and Halo. However, the company had to approach the creators of the franchises in order to included them in the final product. Naughty Dog was the first to be approached by McDonalds. Naughty Dog didn't like the sound of their franchises, Jak and Daxter, and Uncharted, appearing in a non-Sony title, due to the fact that both franchise are owned by Sony Computer Entertainment. Sony and Naughty Dog eventually agreed to let McDonalds uses their characters appear in McDonalds' title.

Square Enix announced that they signed a deal with Mattel to publish three Hot Wheels games. The first Hot Wheels to be published by the company was Hot Wheels: Watch Racers developed by Got Milk Entertainment, which was released in November 2013.

McDonalds Interactive called in Starbreeze Studios to provide assistances in development. Starbreeze had finished development of Payday 2 and jumped the gun to join the game's development.

The game's music was composed by Ramin Djawadi and Green Day guitarist Tré Cool. The Main Menu's music features the same medley as the original from the 2004 game. 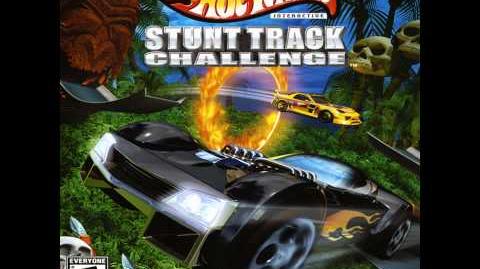 Stunt Track Challenge was fully presented at E3 2014 with a full poster and trailer. Gameplay footage was shown at E3 2015. It featured SpongeBob SquarePants racing against Pikachu, Sonic the Hedgehog, and Mario on the Pirate's Cove map.

Two teasers for the game were inserted in retail copies of Watch Racers and in PlayStation 4 and Xbox One retail copies of Tomb Raider (2013), announcing the release to be in 2015. Mattel announced a toyline based on the game in December 2014.

Prior to the game's release, various stores offered extra items as a way of attracting customers to order the game from their store. In North America, GameStop offered the in-game Challenge Tomb. Pre-orders from  Sony Store also received 1700 Sony Points for PlayStation Network.

Customers ordering from Amazon, received access to the Hot Wheels: The Tomb Raider Final Hours Edition, including with a 32-page art book, an in-game Hunter Skin for the Deora II, Sling Shot, Bassline, and Power Rage.

A limited edition wireless controller for the PlayStation 3 was also released on November 10, 2015. A download code for an PlayStation exclusive playable Tomb Raider multiplayer character was also included.

An open beta for PlayStation 4 users was announced by Sony on June 16 at the end of Sony's E3 Press Conference. The beta started on October 27, 2015 and ended on November 3.

On November 6, 2015, Square Enix announced that 4 million people participated in the beta.

The second DLC pack, "Own the Cities", was released on January 28, 2016. It features the Krazy 8s, Ferrari F430 Spider, Rat-ified, Reverb and Power Bomb cars. It also includes Colonel Hoffman, Anthony Carmine, and Lieutenant Kim from Gears of War, Cortana from Halo, and Falco Lombardi from Star Fox.

The third DLC, "Unearthed", was released on March 11, 2016. It includes new map locations set in The Last of Us. The characters Joel and Ellie were also included.

Dan Ryckert of Giant Bomb gave Stunt Track Challenge 3/5 stars, praising the game for capturing the fast paste fun of Hot Wheels, but complained of the game's lack of content on release. Game Informer's Matt Miller noted that the game's multi-crossover appearance of famous television and video game series characters make the game completely unprofessional due to their genres being aimed at different types of gamers. Ryan Taljonick of GamesRadar lauded the location's setting and environment, and expressed that "not one area ever feels like a rehash of another". Taljonick also felt that the game had great pacing, and that it is "unrivaled by any other game in the genre".

Peter Paras of Game Revolution gave it a 4 star rating, saying that "It may not be as challenging as Rise of the Tomb Raider... but it's still enjoyable to play with it's crazy confusing level designs".

Peter Eykemans from IGN gave the game 8.5 out of 10 and called it "a multi-crossover fun for fans of any Sony, Microsoft or Nintendo". Leon Hurley of GamesRadar had a positive impression of Stunt Track Challenge 's ability to choose any vehicle and driver for the game modes and awarded it 4/5 stars.

Reviewers praised the game's graphical quality. Gerstmann said the use of lighting added a unique style to the game. He also liked the depiction of the two major areas of the game, and the game's sounds, which he said suited the tone of the game.

Dickson, Milano, and Marsden were praised for their hosting in the game's "Game Show" mode. Jeff Gerstmann from Giant Bomb noted that Dickson delivered a more calm performance than Milano and Marsden. In contrast, Martin Gaston from VideoGamer.com said he was disappointed with the game challenges and considered them one of the game's biggest flaws.

The game's AI and custom design received praise. GameTrailers' reviewer said the AI cars have the intelligence to know when to slow down at every turn and dodge every obstacles and with the ability to custom design the players' cars, make the game a worthy ride along.

The multiplayer received acclaimed. Gaston said it was "Fast & Furious and Need for Speed having lunch together". Dan Whitehead from Eurogamer compared it more favourably compared to Need for Speed's always online connection.

The level and track designs were praised. Gaston and Hurley found the Lava/Snow Volcano episode most crazy with the combined elements of lava and snow altogether. Gerstmann thought that the tracks were insanely fun for any Hot Wheels fans, though he praised the Bikini Bottom level's tracks the most.

Stunt Track Challenge received praise from other studios and figureheads in the gaming industry. Prior to launch, Phil Spencer, president of Microsoft's Xbox division, tweeted that "it will be a fun arcade game". Spencer would later follow up his tweet by further congratulating McDonalds and Starbreeze "on a great job on #HWStuntTrackChallenge, outstanding work".

Epic Games founders Tim Sweeney and Mark Rein found the game uninspiring while praising Gears of War protagonist Marcus Fenix's playable appearance and the appearance of the COG Trike. Design director Cliff Bleszinski agreed with Sweeney and Rein saying "While Hot Wheels may not please the people over at Epic Games, it does give them motivation to include the Trike in future Gears".

SpongeBob SquarePants series creator Stephen Hillenburg was impressed by the appearance of his characters and expressed interest in a crossover between SpongeBob and Fairly OddParents in the future. The Fairly OddParents creator Butch Hartman agreed with Hillenburg on the subject and called Stunt Track Challenge, "an influence in the crossover industry".

Similarly, Uncharted series developer Naughty Dog praised the game, and thanked both McDonalds and Starbreeze for adding Nathan Drake in the game. In June 2016, Naughty added several characters from the game into their PlayStation 4 title, Uncharted 4: A Theif's End.

Hot Wheels Stunt Track Challenge debuted at No.1 in the UK for retail non-digital sales according to Chart-Track in its first week of release, and became the fourth fastest-selling title released in 2015. It was also the fastest-selling online PlayStation 4 video game, breaking the record previously held by Destiny, until being over taken by Star Wars Battlefront.[5] The game preformed more successfully than Rise of the Tomb Raider which suffered lower than expected sales, selling less than two thirds than that of its predecessor.[6][7][8][9][10][11] Stunt Track Challenge also topped the charts in France, Ireland, Italy, the Netherlands, Norway, and the United States.

Retrieved from "https://fantendo.fandom.com/wiki/Hot_Wheels_Stunt_Track_Challenge_(2015_video_game)?oldid=2358528"
Community content is available under CC-BY-SA unless otherwise noted.