Hoothoot (Japanese: ホーホー Hoho) is a dual-type Normal/Flying Pokémon. It evolves into Noctowl starting at level 20.

Hoothoot is a round, owl-like bird with two stubby wings and a short, fan-shaped tail. It has large red eyes with beady pupils. Its feathers are mostly brown with a beige underbelly. Hoothoot has a large black, mask-like crest, which encircles both eyes and covers the face. The crest has two protrusions at the top resembling the hands of a clock. The parts of the crest below each eye have notches resembling the teeth of a clockwork gear. Hoothoot has a small, hooked beak and two feet with five digits. Although it will typically only stand on one foot at a time, it alternates between the two at speeds too difficult to track with the naked eye.

Inside Hoothoot's body lies a special organ that senses Earth's rotation, allowing it to keep track of time. Hoothoot is well known for its ability to keep rhythm by precisely tilting its head in time, much like a metronome. Everyday at exactly the same time, a Hoothoot will begin hooting. Hoothoot is most commonly found nesting in trees and forests. 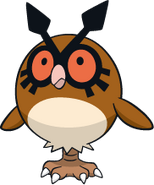 Generation VI
Add a photo to this gallery
Retrieved from "https://fantendo.fandom.com/wiki/Hoothoot?oldid=2906633"
Community content is available under CC-BY-SA unless otherwise noted.