View source
“Whooo's there? Whooo woke me up? It's still daylight--I should be sleeping! Hey, as long as I'm up, why not take a short flight with me?”
— Hoot the Owl, Super Mario 64

Hoot the Owl is an owl that first appeared in Super Mario 64. First encountered in Whomp's Fortress, Hoot will carry Mario (or his allies, in Super Mario 64 DS) to the building's summit once awoken; which can be done by climbing into his tree. In addition to being found at the base of Whomp's Fortress, Hoot can also be encountered in the worlds Cool, Cool Mountain; Snowman's Land; Tall, Tall Mountain; and the huge side of Tiny-Huge Island, where he will continue to offer his service of flying Mario around the map once awoken.

It is unknown if Hoot is a single member of a species or intended to be his own character by Nintendo, as his Japanese name means "owl" when translated into English. In addition, two owls that look similar to Hoot appear on the Woody Woods board in Mario Party 3, possibly suggesting Hoot to simply be the Mario franchise's equivalent of the real-world owl.

Hoot the Owl is a brown owl with yellow tipped wings. He has round big eyes with brown eyelids and yellow eyes. He also has orange clawed feet, with which he is able to carry the weight of a human for a limited time.

A reference to the fact that owls are nocturnal predators, Hoot is depicted as a tired individual who can often be found sleeping in his treetop homes; his lethargic personality is apparent in his drooped eyelids as well. The owl also appears to be a very cooperative character, as he offers to carry Mario around the levels he can be found in despite being startled awake.

Mario Party Advance reveals that Hoot is also a heavy (and unfortunate) gambler, as he has incurred a great debt at the Jungle Game Hut after a long losing streak. The player is able to help Hoot pay off his debt of 30 Coins, though the credits show him shaking his head in disappointment at another loss.

Hoot the Owl picks up Mario and can take him up into the sky so long as the player holds onto the action button. Letting go will release Mario. Hoot can only carry Mario so far before he drops Mario off, complaining that Mario should "lay off the pasta". When released, Hoot will fly back to the tree where he originated.

Hoot's drop off mechanic is confusing for a couple of reasons.

Hoot the Owl is listed as a supporting character in Mario 3D World. If you hit a Hoot Block, Hoot will come out and begin flying around. You can jump and grab onto him, like in Super Mario 64.

Hoot can be found in Super Mario 64 Switch sleeping in trees in several courses during the game. When Mario and co. climb into his tree, he will complain that they woke him up during daytime, but will then offer Mario and and friends a ride to the top of the course. The player can ride Hoot for as long as they would like. However, if Mario and friends hang onto Hoot for too long, Hoot will complain that their weight is making it difficult for him to carry them for so long, dropping them afterwards. 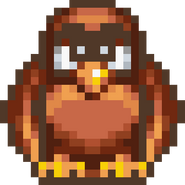