Bees are a race native to the Honeyhive Galaxy in the Super Mario Series. These bees bear service to Queen Bee, the ruler of the Honeyhive Galaxy. The Bees rival with a neighboring species called the Mandibugs, who constantly try to take over the Honeyhive Kingdom from the Bees. Despite the bitter rivalry, Bees are generally friendly creatures who greet others with sheer kindness. They also allow Mario to use the Bee Suit, giving Mario the ability to fly, stick to honey walls, and land on flowers and clouds. Bees are also friendly to Mario, and serve the Queen Bee. In addition, the Bee Mushroom makes its first appearance in this game, which allows Mario to transform into Bee Mario. In this form, Mario is able to flutter through the air for a brief period of time, and also stick to and climb Honeycomb Walls. 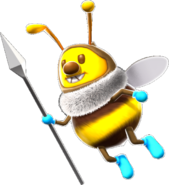