Honey the Cat is a character from the Sonic the Hedgehog series. She was meant to make her debut on Sonic the Fighters but was removed before the game was released. Nonetheless, fans had found her data was still in the game and could be accessed through the use of cheats/glitches. She would become a fully playable character in the 2012 HD re-release for Xbox Live Arcade of Sonic the Fighters.

Honey is based off the character of the same name from Fighting Vipers. Despite her one appearance in the Sonic franchise, she became a fan favorite among certains fans of the Sonic fandom. She would later appear in the Archie's Sonic the Hedgehog comic book series, with a fully developed character.

Honey also makes an appearance in Sonic Heroes 2. Here, she is a supposed love interest for Big (while she claims it, and perhaps obviously, he believes it). She likes hanging around in Sunset Park Zone, and is responsible for the thwarting of Team Covert's train hijacking.

Honey the Cat is a major character in the Sonic Blur reboot series, replacing Charmy the Bee as a member of the Chaotix crew. 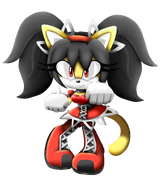 Add a photo to this gallery
Retrieved from "https://fantendo.fandom.com/wiki/Honey_the_Cat?oldid=2486152"
Community content is available under CC-BY-SA unless otherwise noted.