Honey Queen, or Queen Bee, is a recurring character in the Super Mario series of video games. She is the ruler of all the Bees that live throughout the galaxies of Super Mario Galaxy and its sequel; specifically those in the Honeyhive, Honeyhop, and Honeybloom Galaxies. She is an extremely large bee, towering over her subjects, who speaks using nosism. Throughout her appearances, Honey Queen has been voiced by Katsumi Suzuki, who also voices Diddy Kong.

Honey Queen has been confirmed to be an unlockable heavyweight racer in Mario Kart Burst.

The Honey Queen makes an appearance in the Honeyhive Kingdom. 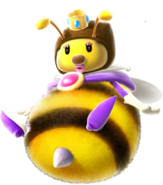 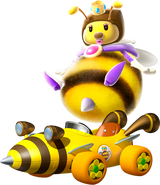 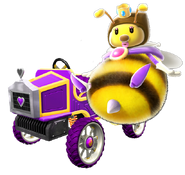 Honey Queen with her Heart Coach in Mario Kart 9.
Add a photo to this gallery
Retrieved from "https://fantendo.fandom.com/wiki/Honey_Queen?oldid=3266855"
Community content is available under CC-BY-SA unless otherwise noted.