Ho-Oh is the version mascot of Pokémon Gold and its remake Pokémon HeartGold, appearing on the boxart of both.

Ho-Oh is an avian Pokémon resembling a phoenix and a peacock. Its feathers are predominantly gold and red, with yellow tail-feathers, a white underside, and green feathers at the tip of its wings. Ho-Oh has a green stripe on its neck, a yellow beak, black rings around its red eyes, and a feathered, yellow crest on its head. Ho-Oh's wings are prismatic, causing it to trail a rainbow behind it. It has darkly colored feet and legs with four toes and long talons.

Ho-Oh has a mythical power to resurrect the dead. Ho-Oh was the only known Pokémon to learn Sacred Fire, its former signature move. It is said that when it flies its huge wings create bright, colorful rainbows. The rare few who bear witness to Ho-Oh are promised an eternal happiness. Ho-Oh used to perch at the top of the Bell Tower (or Tin Tower) until the Brass Tower was destroyed by fire. It now presumably flies through the world's skies in search of a Trainer with a pure heart.

Ho-Oh is based on the legend of the phoenix, specifically the Fenghuang, the immortal phoenix of China from which it derives its name. It is also based on the Huma bird, a legendary bird that is said to never rest, living its entire life flying continuously, and resurrects itself and others in its own ashes and flames. It is a symbol of fortune and friendship and will bestow happiness to anyone who simply glimpses it. Many cultures view the Phoenix and Huma as symbols of resurrection; this is seen in Ho-Oh, which was reborn rising from its own ashes and had a hand in resurrecting Suicune, Raikou and Entei. It may also be based on many other firebirds; some examples are the three-legged bird, Simurgh, and the Ember Bird. It also is similar to the rainbow-feathered bird god Achiyalabopa. 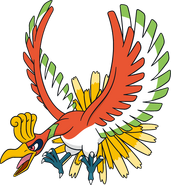 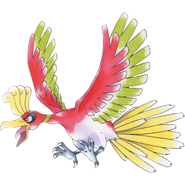 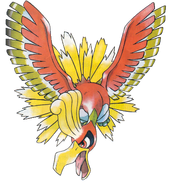 Ho-Oh from the Box Art of Pokémon Gold 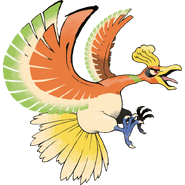 Ho-Oh from the Box Art of Pokémon HeartGold

Ho-Oh in the Pokémon Stadium series
Add a photo to this gallery
Retrieved from "https://fantendo.fandom.com/wiki/Ho-Oh?oldid=3119588"
Community content is available under CC-BY-SA unless otherwise noted.