It evolves from Tyrogue starting at level 20 when Tyrogue's Attack and Defense are equal. It is one of Tyrogue's final forms, the others being Hitmonlee and Hitmonchan.

Hitmontop is a vaguely humanoid Pokémon capable of spinning on its head. Its main body is spherical and mostly blue with a brown triangular patch on its chest. It has short legs with white bands near the hands and feet. The feet are large, blue and have a circular brown pad on the underside. It has a skinny brown tail that ends with a blue sphere with a spike on it. Its head is round and brown with flat, curved extensions on either side and a single spike on top. It has a beady, black eyes and spherical hands with no digits. Hitmontop is a male-only species with no female counterpart.

Hitmontop moves more quickly by spinning on the spike on its head than it does by walking normally. Capable of spinning at high speeds, it may bore into the ground similar to a drill. While spinning, Hitmontop delivers smooth, graceful kicks such as its signature move, Triple Kick. As an urban species, it is often found in towns and cities. 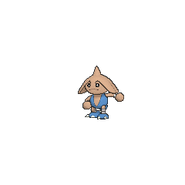 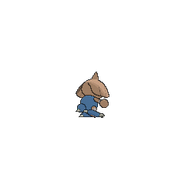 Add a photo to this gallery
Retrieved from "https://fantendo.fandom.com/wiki/Hitmontop?oldid=1795543"
Community content is available under CC-BY-SA unless otherwise noted.