Living in the harsh deserts of Gerudo Valley, Hiro was crowned King of the castle levitating high above Ganondorf's castle. Ganondorf, being full of pride, constantly attacks Hiro Castle to eliminate competition, this technically makes him a Gerudo. Hiro volunteered for the Ion Army with his brothers Inferno and Pheonix and within twelve hours he was captured and experimented on for 6 hours. Later he woke up and escaped using Chaos Control, which he gained from his captors, and returned to his kingship.

Hiro was a participator in Fandemonium, but was eliminated due to his constant drunkenness and rudeness. Enraged, he shoots several of the evil Fandemonium Producers, as well as Metal Locked v2 and Steel (though the latter two survive).
He was last mentioned in Hark & Flame's second episode, with Moyan mentioning that the producers attempted to recruit him for the new show, but he responded in much the same way he did earlier: shooting at them. 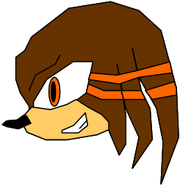 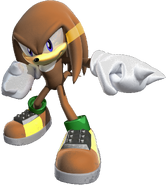 A 3D image made by Mogwai.

Hiro as redesigned by Exotoro.
Community content is available under CC-BY-SA unless otherwise noted.
Advertisement