Hinweis is a story telling RPG adventure game based on the fairytale of Hansel and Gretel, developed by Dollhouse Games and released for PC and Mac on Steam and Origin. The game follows Hansel and his sister Gretel after their encounters with the evil witches Maldehyde and Süsshilde.

Hinweis incorporates elements of action, adventure, and role-playing games. The player controls Hansel and Gretel from a flip-screen overhead perspective as they travel in the overworld, a large map with varied environments. Throughout the game, various characters aid Hansel and Gretel by giving or selling equipment and clues. These people can be found in houses and stores around Hinweis, and interaction with many of them is required to move on to the next act.

Barring Hansel and Gretel's progress are demons and monsters they must battle to proceed with their mission to fight Maldehyde. The game features many locations known as dungeons, where a main demon lives. Each dungeon is a unique, maze-like collection of rooms connected by doors, openings, and secret passages. Dungeons also contain useful items that Hansel and Gretel can add to their inventory, such as a bow and arrow for retrieving long range attacks, and a sword made of a deep blue metal. 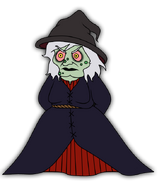 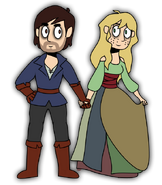 Freja
Add a photo to this gallery
Retrieved from "https://fantendo.fandom.com/wiki/Hinweis?oldid=2516024"
Community content is available under CC-BY-SA unless otherwise noted.