Helmer is a character introduced in Super Luigi Odyssey. He is a Bonneter that joins Luigi on his quest to find mario. He's the owner of an airship shop located in Bonneton.

Helmer appearance is a black builder helmet with with small blue hair sticking out. He has green eyes and bellow the helmet is a white ghostly body like most other Bonneters. Like them, he can transform into any headgear he wants.

He is the owner of the airship shop of Bonneton. He has a very short temper wich makes him intimidating to most Bonneters (and people who fear ghosts). He's prone to blowing his stack if something goes wrong, but as long as you stay off his bad side, you'll get along with him with no trouble.

Like most Bonneters, Helmer can shapeshift into different hats and is capable of being thrown like a boomerang. He's also capable of capturing enemies and using them to his advantage.

Luigi Meets helmer in the Cap Kingdom at the start of his journey. He briefly takes out his anger on luigi before apologizing. he decides to join luigi on his adventure in order to get revenge on Bowser and His army. The two get along pretty well. Thanks to luigi's shy nature,luigi manages to avoid making helmer mad.

Helmer doesn't interact with Mario as much as he does with Luigi,but the two are still on good terms with each other. After the events of Super Luigi Odyssey,Helmer thanks Mario when he finds out that he already took care of Bowser and most of his army.

Helmer and Cappy are on good terms with each other. The two do occasionally argue thanks to helmer's short temper,but they still manage to retain their friendship and work together when something isn't right.

Tiara and Helmer and on good terms with each other. While Helmer isn't related to Tiara and Cappy,he still sees Tiara as a little sister and stands up for her if someone tries to harm her.

Helmer makes his debut in Super Luigi Odyssey. In this game, he's Luigi's main method of attacking and he's the one who gives Luigi access to the capture ability. The reason he joined Luigi on his quest is to get revenge on Bowser for destroying his airships.

Helmer returns as Luigi's partner, with the same abilities he had in Super Luigi Odyssey. He is unique among the Bonneters due to giving Luigi a higher bounce that Luigi spins in the air from, descending down slowly.

Helmer returns in this game as an NPC. he lost a battle against sonic and wants to get revenge.

Helmer appears as a playable character in Super Mario Spikers, appearing as a Balanced-type captain. Like the other Bonneter captains, he Captures an enemy to make himself stronger on the court - in his case, a Para-Hammer Bro., allowing him to throw hammers and fly around the court. His emblem is a silhouette of Top Hat Tower from the Cap Kingdom, but with a helmet instead of a top hat, and his theme is British Soul. 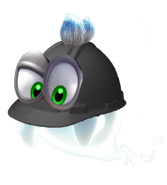 Helmer with a confused face. 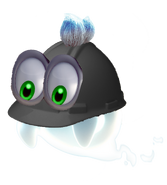 Helmer when he's not angry

The normal Helmer on Luigi's head 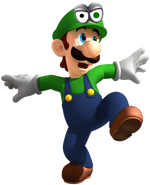 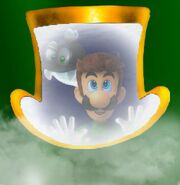 Luigi and Helmer looking out of the window of their ship.

helmer and luigi in another world

Helmer,Cappy and Tiara during the ending of Super Luigi Odyssey 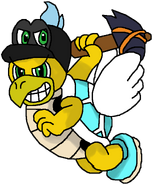 Helmer in Super Mario Spikers
Add a photo to this gallery

Luigi as a Spark Pylon

Luigi as a Goomba

Luigi as a Shoe Goomba

Luigi as a Green Koopa Troopa

Luigi as a Red Koopa Troopa

Luigi as a Hammer Bro.

Luigi as a Boomerang Bro.

Luigi as a Fire Bro.

Luigi as an Ice Bro.

Luigi as a Para Bro.

Luigi as a Water Bro.

Luigi as a Lakitu

Luigi as a Bullet Bill

Luigi as a Banzai Bill

Luigi as a Cheep Cheep

Luigi as a Snow Cheep Cheep

Luigi as a Lava Bubble

Luigi as a Slime Bubble

Luigi as a Poison Bubble
Add a photo to this gallery

Retrieved from "https://fantendo.fandom.com/wiki/Helmer?oldid=3185523"
Community content is available under CC-BY-SA unless otherwise noted.