Havoc in the Pantheon!

The DLC is set to be released for Nintendo Switch on 2021. It marks a change from the serious tone of the franchise for a light and fun experience, even if the HTTW Team specifies that in the next, and third, DLC, players will find again the usual darker tone, describing the Super Ultra Arcade Edition DLC as a "well-deserved break".

The biggest introductions of this expansion pack are one new fighter, a new arena, a new version for a stage and a new Bonus chapter in the Story Mode but it also adds to the original game new music tracks, new challenges for the Ascension mode and new outfits. 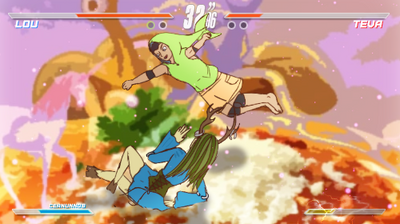 The expansion pack adds several enhancements to Heirs to the Wrath, including one new Hawaiian fighter, Teva and one new arena, Flying Spaghetti Monster, a new version for the stage Sunrise Beach. There is also a new bonus chapter in the Story Mode called Ice creams melt in the sun, which takes place after the event of the Chapter 3, when the former Primordial Program members go spend some time in a retreat.

The DLC also comes with some character balance changes, meaning that a wave of gameplay changes were made to make the cast more balanced working on, for example, their damage value, their stats, their hitbox, their movements, their hit effect alterations and even their combo. All fighters will also receive new moves to develop the strategies around their gameplay.

One new fighter is introduced in the Heirs to the Wrath - Super Ultra Arcade Edition!!!. The game features, now, a roster of 19 playable characters. 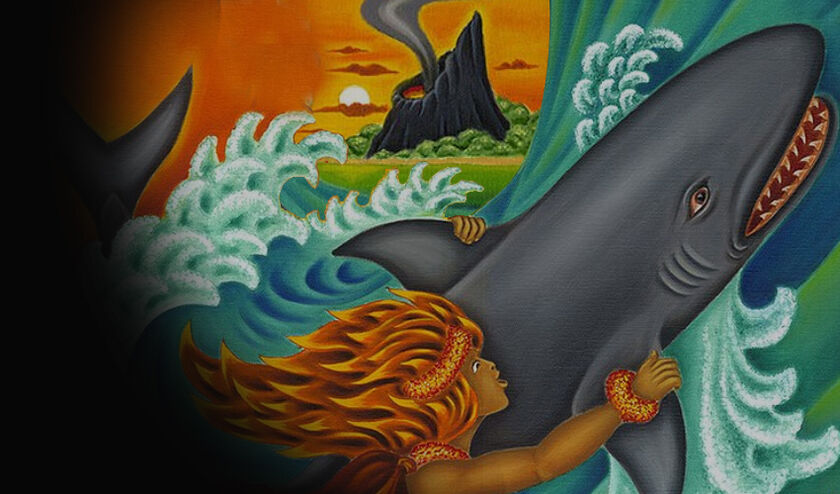 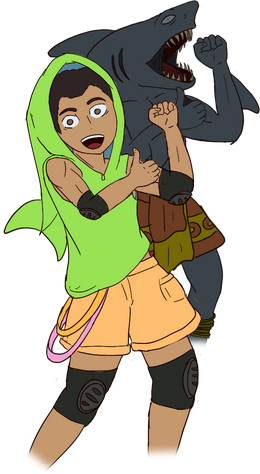 Teva is a crazy kid. Full of energy and malice, he’s often in trouble but always gets out deftly of the mess he created in the first place.

Teva was among the Heirs who were imprisoned by the Eighth Seal in the wait to be sacrificed to nourish Qingyun's powers. Fortunately, it just stays few days before being freed by the Primordial Program during their fight against the Eighth Seal leader.

Teva is too young to join the Primordial Program as a operational member and, in contrary to Lou, he has his parents who takes care of him with the help of the Primordial Program. But since he was saved from the Eighth Seal HQ, he hopes that one day he will join Zoya and Lou and save the world against the evil cult… he still has to wait but maybe he can try to join them much earlier… by proving them how strong and determined, if not stubborn, he is.

One new stage and a new version for an existing stage are introduced in the Heirs to the Wrath - Super Ultra Arcade Edition!!!. The game features, now, 18 stages.

With two new fighters comes new Tag Moves as certain characters have a special moves together if they are affiliated.

In the Ascension mode, you have now six new Upgrades to use, for a total of 63 Upgrades.

As secret challenges, you have to unlock them by doing specific action. 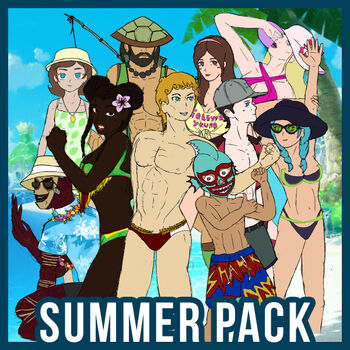 Each fighter has now a fourth secret outfit set (a fighter's outfit set includes a costume for each of their form: human, deity and, if available, alternative deity).

Teva also has four outfit (including the two secret ones from the DLCs) set available despite being new to the roster.

This time, for the human form, it’s a topical new outfit set as each fighter gains a Beach outfit, wearing bikini, speedo, beach shirt, sunglasses or even solar cream marks.

For the Deity Form, each character (except Caleb and Darren who use the same outfit between their Human and Deity form) has a new Deity outfit which doesn’t necessarily follow the Beach theme. 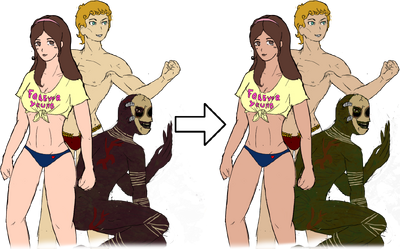 In some stages, fighters can get gradually tan through their fight, giving them a more tanned skin color but also tan marks, when their clothes move, or even sunburns for some of them. The tan doesn’t work on the Deity Form (but will stay at the same level as left when the fighter will go back to his Human form) and can be disabled in the options.

With his particular skin, Darren get greenish tint when tanning.

Heirs to the Wrath - Super Ultra Arcade Edition introduces a brand new chapter in the Story Mode working as a side-story from the main storyline. Playing with humor we see most of the Primordial Program members taking a break on a beautiful beach.

When you finish the arcade mode with a fighter, you unlock a cinematic where a memory from the fighter is shown in the form of a slide of images. With one new fighter in Super Ultra Arcade Edition!!!, one new ending is unlockable.

When you finish the last challenge in the Ascension mode with a fighter, you unlock a cinematic where is the fighter is interviewed by Janus who has a different tone of voice and gesture depending on who is talking to. Depending on the fighter, he can be excited, terrified, flirty or childish.

The player then has a choice between three questions, he could only ask one.

With one new fighter in Super Ultra Arcade Edition!!!, one new ending is unlockable. 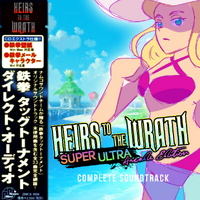 The Heirs to the Wrath - Super Ultra Arcade Edition DLC offers new tracks to the game. As expected from the lighter tone of this DLC, most of the new musics give upbeat sonority. the HTTW Team Composer describes it as having a different sound and relating it to indie rock in Los Angeles.

Thanks to all of you who took the time to draw the characters of Heirs to the Wrath! If you did an art about this game and want me to share it here just post it in the comments.

Hi <insert your name here>! This project is owned by Coral

You can see more here !  but first leave me a comment!

Retrieved from "https://fantendo.fandom.com/wiki/Heirs_to_the_Wrath/Super_Ultra_Arcade_Edition?oldid=3257928"
Community content is available under CC-BY-SA unless otherwise noted.