Hedlok is a boss character in ARMS. It is a four-armed experiment created by Dr. Coyle from ARMS Laboratories, like Helix and Springtron, although Hedlok appears to be more sinister and dangerous, making the situation of it having escaped more urgent.

Hedlok attaches itself to the heads of other fighters in order to take control over them, which means it can attack its opponents with six ARMS, including the ARMS of its host.

Hedlok can be fought in the VS Hedlok mode, in which three ARMS fighters take on Hedlok, possessing the body of another fighter. It is also the final opponent in 1-on-100 mode, where it attaches itself on the body of a standard enemy.

Hedlok is a giant, metallic head resembling a skull. It has four ARMS, placed on each side of its head. Its ARMS appear to be springs with red innards. Its teeth have a notable golden color and its eyes are red, which interestingly also have spirals in them, colored white.

Hedlok reappears in Boss Battles in Arcade Route, although under several different variations. The actual Hedlok seen in ARMS does not actually reappear in Boss Battles, oddly enough.

These new variations are listed below and appear on different difficulties.

Hedlok appears as an item in Super Smash Bros. Discord. When Hedlok is picked up, the player gains additional punching attacks when using their normal moves. They also gain an enhanced, further and stronger grab when wearing Hedlok. Hedlok can be knocked off if the fighter gets knocked down, allowing the opponent to steal it for themselves. Hedlok also has a timer that appears above the fighter that gives them a total of 15 seconds of use before it vanishes.

Hedlok being built by Dr. Coyle and The Cell 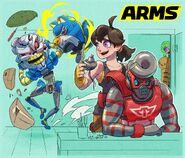 Mechanica repairing Springtron while Byte and Barq have a bit of trouble with Hedlok. 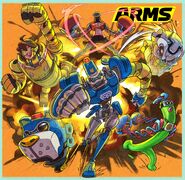 Retrieved from "https://fantendo.fandom.com/wiki/Hedlok?oldid=2906592"
Community content is available under CC-BY-SA unless otherwise noted.