Fantendo - Game Ideas & More
Register
Don't have an account?
Sign In
Advertisement
in: Free to use Characters, What is the New Fantendoverse?, Pansexual Characters,
and 8 more

Hazel (full name Hazel Avvoom Quantumich) is an Herald who cares deeply about the infinite multiverse and it's occupations, to the point where she'll entrap universes to preserve them via a trick with the Stenographer Stones. While good meaning, much more so than her friendly rival Zellen Harley Quimbleson, she has done untold amounts of accidental damage to the Fantendo multiverse, as the universes she entraps cannot interact with other universes inside the Fantendo multiverse, possibly dooming themselves via the "fish tank" effect. She was created by Helena Harper (t∣b∣c) to have a character that could oppose Zellen morally as a villain and serve as a in-narrative device to lock off universes from interacting with others if the creators wished for it.

Hazel is a mysterious Herald from an dark universe known as the Azalian Depths, which sank into the Deep Wasteland. She is the sole survivor of this old universe and makes her home in the New Fantendoverse a planet called Rapheon, which exists in the same star system as Xicicle. She cares deeply for everyone in the multiverse, going out of her way to hunt for Stenographer Stones for her purpose of keeping the multiverse safe, as well as the illusive second amiibo Phone. Hazel is the dark counterpart to Zellen Harley Quimbleson, mirroring her in many ways.

Hazel is a red haired and red eyed woman with freckles on her face. She carries a pair of black glasses with orange sigils on the lenses on the top of her hair. In her hair she also has fastened two black Devil Blades similar to her light counterpart Zellen Harley Quimbleson. She wears a red dress with a chest window and the dress is sleeveless, allowing her to show her somewhat muscular arms which have black Japanese-style armor plates across them. She wears metal and leather infused boots. She carries around a black and red lunch box that contains her favorite foods, stealing this idea from Zellen.

Hazel Avvoom Quantumich is a strong woman who carries herself rather confidently, but carries a sense of humbleness and passion for everyone she comes across- it would be hard to upset her, as she has undying patience for every living thing in the multiverse. This love comes at a cost though- Hazel has become an infamous villain across the multiverse for sealing off universes in the Fantendo Multiverse to "protect" them from danger, but in actuality locks off discovery from other Heralds and creates a "fishbowl" effect where nobody can enter or leave unless Hazel brings them in or out. As such, when the universe catches wind with this, it can lead to destructive effects.

Hazel is also willing to work with anyone to further her goals, although she does it in a more geunine way and doesn't openly betray her team to get Stenographer Stones, instead stealing them secretly or being open about her intentions if she feels she can trust her team to take the news. She is reserved but fairly friendly and is easy to befriend. Despite her role as a villain, it's hard to not feel like she's a trusted individual. She carries her trauma pretty openly- unlike Zellen who has yet to open up about her's, even to people she's married to.

Hazel is also confident in her looks, although not openly flaunting of her beauty. Even with a chip in her teeth, she considers herself rather attractive and is self-confident. Hazel has a lot figured out, which is why she feels unwilling to learn and grow as a person.

Hazel possesses the ability to channel Abyssal, the antithesis to Aura. The Abyss that Hazel possesses pulls from their origin universe of the Azalian Depths, which Hazel is the only person to remember due it due to having recorded it's final cries before it vanished permanently from memory. Drawing upon her pain so often from the loss of the universe both drives her as a power as well as her dark powers. 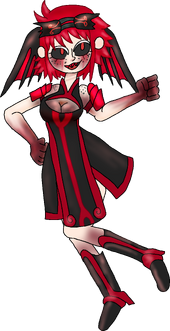 Dark Abyss Hazel is the name of a Abyssal transformation that Hazel can take on while on their home planet Rapheon or the planet of Xicicle, both planets which exist between what is known as the Spirit Universe and the Wasteland. These two planents are powerful Abyssal conduits for Hazel as it exists between the space of dead and forgotten, two places where Abyssal can be pulled from the easiest. While in this form, Hazel becomes inundated with non-stop sharp pain sensations but can pull from Abyss as long as she can stand it.

Dark Abyss Hazel takes on a new coloration for her outfit, swapping many of their colors to black or reds. Their hair also becomes a blood red, and they begin to cry blood from their now black sclera. Their hands, feet, chest, and cheeks take on a deep red bruised color. Their freckles also become ash black.

Dark Abyss Hazel is able to utilize this large conduit of Abyssal power to create vast gardens of Abyssal-generated trees, of which the fruit bear seeds of Abyssal energy that allow Dark Abyss Hazel to puppeteer with further Abyssal. These seeds inflict nails into the hands and feet of the victim, of which leave bruises even weeks after the puppeteer incident. The victim is fully aware they are being controlled and in deep pain when controlled.

Dark Abyssal Hazel has very limited use but can set up trees that last even after their transformation. When someone eats from the trees on their home planet, Hazel can go into this state to take control of them.