“Mario, this time I won't get beaten! Well, Maybe you will.”
— Harley B. Koopa

Harley Koopa is the 8th Koopaling and probably the most powerful of them all. He is stronger than his own father, Bowser. He has his own personal minions which he calls Harlings. He has made guest appearances in games such as, Super Mario Star Journey and New Super Mario Bros. VR.

Harley looks like his other siblings in terms of features (Shell, Claws, etc.). However, he resembles his brother Morton in terms of facial appearance. His hair is similar to Ludwig von Koopa's hair, except it is red instead of blue. He also has a purple cloak, thus making him the first Koopaling to be seen with visible clothes. However, in his upgraded 3-D version, the cloak resembles more of a suit/shirt than a cloak.

Harley is infact one of Bowser's biological children. He was born a year after Bowser Jr.. But on the day after his 2nd birthday, he went missing. When Harley noticed he was lost, he became very upset and scared. He decided to train himself day and night. After 8 years had passed, Harley had grown into a fine young Koopa and knew he was ready to challenge anything. Then, one day, Bowser had found him again, but neither of them recognized the other. Bowser asked for Harley's name and Harley did just that. That's when Bowser realized that Harley was his long-lost son and Harley had a home once again. But becoming lost had taught Harley to value his family and so he does not allow his siblings to be hurt.

Harley is unlike his siblings in terms of personality. Despite being younger than Bowser Jr., he is much more mature than nearly all of his siblings and does not approve of immature behaviors. As such, he does not like Larry or Lemmy, but he is very close to Ludwig. As said above, he is the most powerful Koopaling, even stronger than his father. Because of this, Bowser frequently asks Harley to do many things for him, which Harley dislikes. Because of this, Harley will one day leave his home and go solo in his life. Overall, he is mainly gentlemanly.

Harley Koopa's first appearance was in Mario & Luigi: The Eighth Koopaling. He was given a role much like that of the other 7 Koopalings, but has a slightly bigger role. He will also have his own series soon. He appeared in Fantendo Smash Bros. Scuffle.

Harley B. Koopa appears in Fantendo Smash Bros. DS as an unlockable fighter. He is very heavy and strong and has decent speed, but he cannot jump very well. His moveset is as follows:

Like his siblings, he can use magic and his magic bolts are dark green. He can also spin in his shell for an attack. What makes his abilities distinct from his siblings is his ability to command the Harley Troop?

Relationships with his siblings 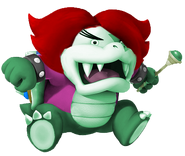 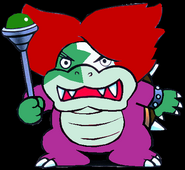 sprite wii of Haley B Koopa.? 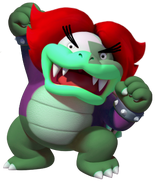 Harley in Princess Daisy and the Legend of the Sarasaland Scepters. 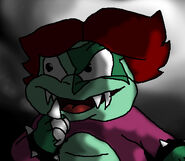 A request for Emerald by Crazzycupcake

Harley by Aiva
Add a photo to this gallery
Retrieved from "https://fantendo.fandom.com/wiki/Harley_B._Koopa?oldid=2646715"
Community content is available under CC-BY-SA unless otherwise noted.