This article is complete. No more content shall be added to the pages - any more edits should only be formatting, grammar etc. changes.

Harbor Wave: Battle for the Seven Seas, usually just shortened to Harbor Wave, is a 3D fighting game developed by Isurus Multimedia Industries. It was released as a launch title for the Nintendo Super Switch, on November 2nd, 2023, with forward compatibility for the original Nintendo Switch. In addition, for April Fools of 2023, a low-quality parody known as Hibber Wiff was released for the original Switch before Harbor Wave's launch, serving as a sort of sneak-peak for the setting and its characters.

Taking place in 2054, various aquatic creatures have rapidly evolved into humanoid, sentient forms, creating what are now known as Seamorphs. As Seamorphs spread and sea levels rose, the world took on a different form. Seamorphs became the dominant species, and humans a minority. In addition, various weird and wonderful animals have evolved as well. The Earth is now a massive untapped source of discovery, be it through ruins, new land, or new species.

The game revolves around the Seven Seas Tournament, a global, heavily-broadcasted tournament held every two years. It is hosted by the current champion, Jose Amaro Zavala - Better known by his stage name, The Eruption. Various different fighters from all walks of life, all across the world, have gathered to partake in this prestigious tournament. However, only one will be able to take home the gold... 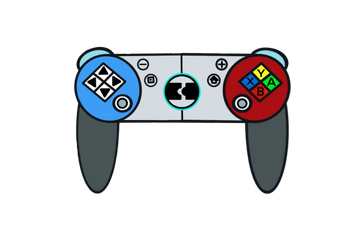 Harbor Wave is a 3D fighting game built around being accessible, but still having depth in its combat. The inputs are simple, without having complex multi-direction inputs like in traditional 2D fighters, and there aren't massive, intricate combo chains like in Tekken.

Gameplay is seen through a behind-the-back perspective, with a split-screen mode for multiplayer. Though, it can also be set to 2D or isometric perspectives instead. Like most fighting games, the goal is to deplete your opponent's health gauge to zero. To achieve this, the fighters are given four different universal attacks: Strikers, Knockers, Chargers, and Specials.

Strikers are the standard attacks, and can be mashed for a combo. These attacks also have directional inputs and a charged variant as well. Knockers are heavy attacks, breaking guards and blowing opponents across the room. They usually have normal and charged inputs, but the exact options can vary. Chargers give fighters a burst of mobility, allowing them to close the gap and follow up in combos. Like Knockers, the Chargers have varying inputs, though they usually have grounded and aerial variants. Specials are unique abilities, with the effect varying between characters. This affects their playstyle, and adds more distinction and identity to their kits.

Aside from the attack buttons, each fighter can jump, dodge, and guard. Guarding is notable, because unlike most fighting games, Harbor Wave allows the player to move around while guarding, albeit slowed and deprived of any other input. Guarding is derived from a Guard Gauge, which slowly depletes every time the Guard button is held, and loses a sizeable chunk whenever hit with an attack. Once fully depleted, you cannot Guard again until the gauge finishes it's automatic refill. This prevents players from just sitting there and not doing anything.

While not really an offensive or defensive action, one can also lock on to opponents. This causes their character to face their foe, preventing them from missing their attacks all the time. Of course, attacks can still whiff, provided the opponent is far enough away from you or moves out of the way at the right time.

Each fighter has different stats and attributes. As such, they are sorted and categorized, visible in training mode or on the pause screens. The stats listed are:

With the exception of Health, which is given as a flat number, the stats are listed on a scale of one to ten.

Outside of combat, Harbor Wave also has an in-game shop where you can purchase costumes and accessories. To do this, you require the in-game currency, the Seamorph Dollar, or SMD. In-universe, SMD is the dominant currency of the Seamorph-Era Earth, set up when the rapidly-increasing Seamorph population banded together to set up their rights and self-determination. In the game itself, SMD is obtained from playing matches, completing challenges, and competing in online events. In addition, logging in daily gives you various different rewards, with SMD being the most common. Overall, SMD is quick and easy to obtain, while still giving an incentive to play some more with what you can buy with it.

Harbor Wave has a decent assortment of modes and rulesets. While they all share the same controls and general gameplay, they each have their own unique twists and gimmicks to spice things up.

Harbor Wave, like any good fighting game, has a roster of unique and colorful characters, each with their own unique attributes and abilities. As of launch, Harbor Wave has 15 different characters, though ten of them must be unlocked before they can be selected.

Harbor Wave, like any fighting game worth it's money, has a wide variety of stages. Some stages are merely there to look cool, while others have unique gimmicks and hazards to shake things up and add tension to the match.