Start a Wiki
“News Flash! This has JUST came in! This happened for one billion times! Princess Peach Toadstool once again has been kidnapped by the Evil King Bowser Koopa! ”
— Hank C. Donovan


Hank "Calvin" Donovan is one of MKTV's employees who serves as the news reporter. His role is sometimes taken by Lakitu with a camera, who is Hank's Cameraman and best friend. He often reports the news that Bowser has kidnapped Princess Peach once again, he also reports other things in the MKTV news, he has a magical microphone which can attack enemies with Hank calling it "Micy". Hank C. Donovan is the first character with autism to be introduced in the Mario franchises.

Despite Hank is a human, he has a slick hair, he also has a short mustache which doesn't cover his mouth, his eyebrows are roundy and his eyes are white with blue and black pupils, like average news reporters, he wears a buttoned suit with a blue tie and a white shirt inside, he also wears black dress shoes in his black suit pants.

He has the same height as Waluigi and Rosalina.

Hank has been known to been diagnosed with a form of autism which is PDD-NOS (Pervasive developmental disorder not otherwise specified), which is the reason he is shy when talking to other people and sightly stuttering when reporting a news, but he is often joyful and happy, he claims that he has a lucky life, but others doesn't get annoyed about him bragging about his life, which doesn't seem to be bragging, and he is afraid to go to places related to Bowser.

Back when Hank was a teenager and lived in Ohio, he was the smartest of the school he used to attend, some though students attempted to bully Hank, but Hank defends himself and wins from the bullies. After he graduated from the Last Year of College, he decided to become a news reporter, but there was no spot for him, after the loss of his parents, some portal has sucked up Hank which sent him to the MKTV headquarters, Hank saw a Lakitu overworking, so Hank decides to help him, he was shy and told Lakitu that he graduated from High School and always wanted to be a news reporter, Lakitu thinks Hank would be a good news reporter and hires Hank.

Hank appears in Mario Party V² as a playable character and the game marks his debut, when Bowser told everyone they can save the world, Hank is seen reporting a news that the earth will be saved by the heroes and that he'll join them, he helps Mario on the quest to save the world from being destroyed by the meteor Fawful has summoned

Hank and the Camera Lakitu are best friends forever since they work together at MKTV, Lakitu was overworked and Hank helped Lakitu by doing the News Reporting job

Hank also likes to have Princess Peach around since there is often news about her. Princess Peach is glad that Mushroom Kingdom has a professional news reporter.

Hank is really scared of Bowser, Bowser often calls Hank "News Wimp" because Hank keeps tattling Bowser on the MKTV news, but Hank sometimes doesn't get scared from Bowser when Bowser is around.

Princess Daisy and Hank C. Donovan are good friends, Daisy always compliments the employees of MKTV as she is the biggest fan of the company. 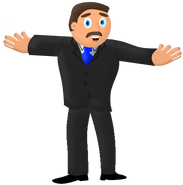 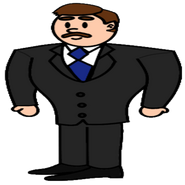 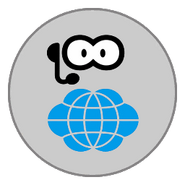 Hank C. Donovan's Emblem (Feel free to use this for your games like your Mario Kart games)
Add a photo to this gallery

Retrieved from "https://fantendo.fandom.com/wiki/Hank_C._Donovan?oldid=2515379"
Community content is available under CC-BY-SA unless otherwise noted.