Hanakatoba is a character appearing in the Doom Dome Battle series, being playable in its first two installments. She also appears as a supporting character in Mission Alpha.

Hanakatoba hovers above the ground, being a ghost and all. She has some spectral powers that she uses but she mainly relies on her nature powers. She can make vines, flowers, carnivore plants, and much more sprout from the ground to attack the opponent. She is a trickster character in that way. She however is a rather slow character.

Her Doom Attack is Act of Nature in which she gets a hold of the opponent with her vines which grabs them by their limbs. Other vines then appear and impale the opponent rapidly. When it KO's them the vines impale so much that it splits the body vertically in half.

Hana was a young girl born in the Asian district, also being of Asian descent. One of the things she loved to learn was kendo, and when she took on the oppertunity she found something she loved even more, her dojo master Koh Kazama. She became his apprentice, and became obsessed with him, but never could express her feelings towards him. One fateful day she however took the leap and confessed, only to be rejected by him because of their age difference. In grief she ran away, but tripped on her way and landed in a bush full of thorns, where no one found her causing her to bleed to death. Her spirit found its way to Koh's dojo and began haunting the place, hoping to be with Koh forever. In an ironic turn of events, Hana gained the ability to control flora, which she also uses to keep the plants in the dojo healthy.

Hanakatoba has been bound as a spirit to the dojo of Samurai Koh and watches him every from there. However when there was a disturbance in Wildefort she was freed from being bound to that one place. The Asian District however became shrouded with demons after Samurai Koh left the place. Hanakatoba tries to protect the place and eventually manages to make her way out of the dojo and searches for Samurai Koh. She finds him and leads him back to the dojo.

Despite her rejection, Hana is still madly in love with Koh and tries to find a way for him to notice her. While Koh embarks on his quest to find new members to rebuild his clan, Hana tries to do the same. She comes across several characters including; Scarlet, Madarai, Vexok and Tyrant hoping to convince them to become members, but ends up in a fight with all of them. Tyrant however wants to drag her into the Underworld where spirits belong and thus she is taken by him. When she tries to get out she confronts Lilith and has a conversation with her about love, which motivates Lilith to go and be the best mother for Rokukai. Hana goes along with her to the surface, teaming up with her to fight Tyrant, and makes her way back to the dojo. She encounters Claudia and Fenrir, the former being fatally wounded. Hana heals her back and allows them to stay at the dojo, in exchange for them to become members there. They accept and Hana is happy. When she confronts Koh at the end of all this, he is glad that she is at the dojo, helping him, even after death. Hana begins to realize that she never will be with Koh, but wants to keep giving her love to him anyways.

Hanakatoba still was bound to the dojo of Samurai Koh in the Asian District which now was the homeplace of the vampires. She however developed a crush on Mirai, the son of Koh after he got married. When Alpha enters the place, Hanakatoba requests her to gets five different flowers and deliver them to Mirai as a token of her love. After doing so Hanakatoba rewards Alpha with her blessing which will restore her health after receiving a fatal blow. 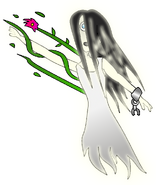 Profile
Add a photo to this gallery
Retrieved from "https://fantendo.fandom.com/wiki/Hanakatoba?oldid=2692046"
Community content is available under CC-BY-SA unless otherwise noted.