A Hammer Suit is an item that made it's debut in Super Mario Bros. 3 where it was a rare power-up that transforms Mario into Hammer Mario, who could toss Hammers like that of a Hammer Bro. at enemies. At that time, it was a black suit like the Hammer Bros. in that game, but as the Hammer Bros. were redesigned, so was the suit.

This suit generally reappears after a long absence. It appears in a few levels and yet again turns Mario into Hammer Mario.

The Hammer Suit appears in Super Mario 3D World. It has a new appearance, it has a shell, green arms, greens shoes, and a green helmet. When Mario or Luigi uses it they have the same appearance as Boomerang Mario. It is a rare item only appearing in Bowser Jr.'s Battleground and Pom Pom's Bombship, it can be bought at Toadette's shop.

In Super Mario Bros. V Hammer Suits are very rare. They can be found in some levels and can be a reward in Brown Toad Houses.

The hammer suit is not shown in Super 3D Bros. Theres a hammer,that if Mario touches it he becomes,Hammer Mario. 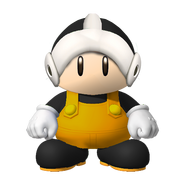 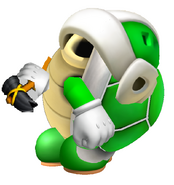 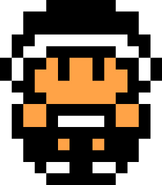 The classic Hammer Suit sprite used in Super Mario Bros. 3.
Add a photo to this gallery
Retrieved from "https://fantendo.fandom.com/wiki/Hammer_Suit?oldid=3184947"
Community content is available under CC-BY-SA unless otherwise noted.