Start a Wiki
Hammer Mario is one of Mario's power-ups which can be obtained by collecting a Hammer Suit. It first appeared in Super Mario Bros. 3, it is also currently the only canon appearance of Hammer Mario, however he has appeared in many fangames. Hammer Mario is modeled after the Hammer Bro. enemy.

Once Mario has transformed into Hammer Mario, he will be able to throw hammers at enemies which will kill them. Mario has an infinite amount of hammers at his disposal, which means that he can throw as many hammers until he loses the Hammer Suit after he has taken damage. The hammers were also very powerful, being able to defeat almost any enemy, even Bowser.

Hammer Mario is able to return into his shell, which can protect him from some attacks such as a fireball, however it cannot protect Mario from simple enemy attacks. The Hammer Suit has also commonly been able to make Mario jump higher just like a Hammer Bro.

Due to it's large power, the Hammer Suit and Hammer Mario were originally quite rare, but have since become a more common item.

This form should not be confused with Mario wielding a hammer, with the main differences being Mario has an endless supply of Hammers, as well as the armour and shell he wears when in Hammer Mario form.

Hammer Mario appeared in Super Mario Exploit, being one of the oldest and strongest power-ups to appear in the game. Hammer Mario had the same powers, however he would move relatively slower when he was in this transformation.

Hammer Mario appeared in Super Mario Evolution, similar to his other appearances, he had the same powers and it was obtained with the Hammer Suit. The Hammer Suit appeared rarely in the game.

In Super Mario World 3D, Hammer Mario was able to throw 3 hammers at once, and could also dash inside of his shell.

Hammer Mario returns! In this game, he has the ability to defeat Boos while the Fire Flower can't. Also counts as two fireballs when used against a boss instead of one. 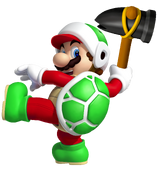 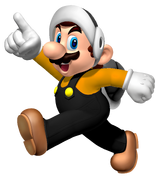 Hammer Mario in his normal clothes
Add a photo to this gallery
Retrieved from "https://fantendo.fandom.com/wiki/Hammer_Mario?oldid=3236590"
Community content is available under CC-BY-SA unless otherwise noted.