A Hammer is a somewhat-common item seen in multiple Nintendo franchises.

Debuting in Donkey Kong (and arguably the first power-up ever seen in the DK/Mario franchises as well as the entirety of Nintendo canon), it is commonly seen in Mario platformers being thrown by Hammer Bros. In almost every Mario RPG, Mario uses a hammer as his own weapon, while the Smash Bros. games feature the Hammer as an item and a throwback to the Donkey Kong incarnation. Super Mario Bros. 3 also featured a Hammer Suit, which allowed Mario to throw hammers.

Link, King Dedede, Kirby (via Copying Dedede or a Bonkers), and Pit have also used Hammers in their own franchises.

A Hammer is a battering item in Super Smash Bros. for the arcade. When a player grabs it, it will continuously swing the hammer for 10 seconds. It causes great damage to opponents with significant knockback and launch rate, but sometimes the head will wear off, causing its bearer to helplessly swing just the mallet. The worn-off head of the hammer can act as a throwing item and slip through nearby opponents, causing great damage. 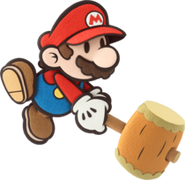 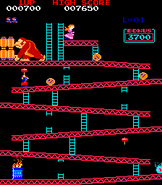 Mario using a Hammer in the original Donkey Kong game. 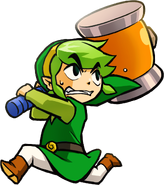 Toon Link using a big Hammer in The Legend of Zelda: Triforce Heroes.
Community content is available under CC-BY-SA unless otherwise noted.
Advertisement