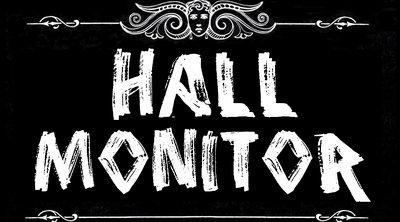 Hall Monitor is a short story by Vonn Karma (t∣b∣c) that was created for the Spooky Scary Writing Contest in the Spooky Scary Fantendo Showcase 2016. It follows three girls; Mimi, Albany and Eleanor after they get a job at Stoutshire Orphange, and come face to face with the urban legend of the place, The Hall Monitor, who gets rid of people if they are caught roaming the halls once everyone is asleep.

It all seemed perfect to Mimi, Albany and Eleanor. Hired at the Stoutshire Orphange, meeting all the kids with grins on their face. Touring the orphanage solidfied the place as a world of wonders.

Whispers of the urban legends in the orphange hit the ears of the three. The Hall Monitor. The one who comes out after every one is asleep, once the place is silent. If he finds you out after curfew, he gets rid of you.

This is how the three girls met the Hall Monitor.

Mimi, Albany and Eleanor walked into the orphanage some 100 years old, yet still in full bloom some how. The children were running amuck with smiles on their faces, as if nothing had ever happened to them. The three new employees were greeted to the orphanage and given a tour.

It truly was at this time of day. Barrowfall Orphanage stood tall with a pleasing wealth of 50 children in the halls. The gothic nature of the house often considered to inspire the children to grow up and do better things, although to many it seemed more like the architecture of the place would summon ghosts, and the gargoyles on the roof were needed to keep the bad spirits away from the house.

But to a child this place seemed like Hogwart’s, except a school for the unloved children as opposed to those whom owned special powers. Many seemed to harbour their own powers of imagination however. Mimi ran into a child called Edmond, left outside in the pouring rain on a grizzly winter night, Edmond had suffered a beating, presumably from the parents, when he was found in the booth of a bar, seemingly out of nowhere. Now Edmond’s scars were cause for him turning into a great monster for the children to run away from during game time, seemingly able to spice up these children’s lives inside what seemed otherwise hollow.

Albany met Fritzi, a young girl whose parents left her on the orphanage doorstop in a casket with a note “I can’t handle having my own child anymore. All she does is whine and cry. This is not living. Goodbye my little Fritzi, love Mum”. Eleanor however was met with the frightening Jerome. He silently sat in the corner away from everyone with his long black hair over his eyes, licking his fingers. He hadn’t said a word since he arrived at the orphanage, his hair had never been in a shower, and the only way he would communicate with people was by writing down yes or no on a small notepad he kept in his right trench coat pocket. The other children managed to figure out that he was abandoned by his godmother whom had a hatred for children, but only realised it after she had to take care of one. It seemed the only way to end up in Barrowfall was to have carers that were awful or lied through their teeth.

The three sat down to a meal with the Headmaster, Yannis. His skin drooped over his eyes, making his glasses look completely useless. Yannis had silver hair tufts on his head, mostly around the sides of his head and his eyebrows. His suit was as old as his skin, with a brown vest and jet black tie, Yannis looked like a steampunk warrior. He muttered, “have free reign of the orphanage and do what ever you want within the rules of the orphanage”. He slammed down three dusty books, laced with a rusted golden crest. He truly was a peculiar one Yannis, he had a nervous tick that seemed to just always go off. He spent majority of his time in the orphanage’s west tower doing paperwork that he feared would never get done.

Night fell and Mimi, Albany and Eleanor each headed to their dorm to read their books. “NO ONE OUT AFTER CURFEW”, the first line read in bold letters.

Retrieved from "https://fantendo.fandom.com/wiki/Hall_Monitor?oldid=3312319"
Community content is available under CC-BY-SA unless otherwise noted.