Gwendoline is a Koopaling who was found by Mario, when they were both very young. Mario did not even know Bowser when he found her. She lived with Mario for a long time and when older, she parted to another place, and unluckily, she started living with Mario's long-time rival. On the first day, Dragonia taught her to cast spells, read and write. They are now best friends, and they are sometimes seen with Dolly and Ellen too.

She is actually one of the only three blood-related children of Bowser and Clawdia themselves.

Gwendoline´s appearance has Lemmy´s small body. Her head is similar to Wendy´s. She wears light purple- lip-gloss and her hair is like Ellen´s, however it is a bit pinker. She is kind and sweet and normally does not behave badly, but she lies making fun, but not with many intentions. She has an obsession with scarves and Poison Mushrooms, for an unknown reason. She has green eyes.

Please warn me at my talk page or in the comments when you would like to use him in your article.

She treats her normally, but they sometimes fight.

She likes his inventions and his rivalry with Ludwig.

Sometimes takes his magic paintbrush and ruins his paintings.

She hates his music.

Sometimes she sprays blue paint for him to look like Ludwig just for fun. If he doesn't notice for a long time, other koopalings will mistake him for Ludwig and will have different interaction

Hates him because he always plays with his circus stuff in her room, because it´s very tidy there.

Always tries to avoid him.

Likes playing basketball with him in spare times.

She always falls into his pranks, but she does not like it.

She thinks he´s too crazy.

Ellen, Dolly, Dragonia and Gwendoline can be seen as a quartet of friends.

Ellen, Dolly, Dragonia and Gwendoline can be seen as a quartet of friends.Gwendoline also enjoys Dolly´s cooking.

Gwendoline sometimes frequents around him.

Hates her because she´s too bratty and bossy.

Gwendoline likes flying on his bullet bills that come from his arm.

Likes piggyback riding with him.

Gwendoline likes to take off her black eye mask.

They don´t see each other very often.

She enjoys his pink shell and often folows him.

She stands up for him when Roy bullies him.

They are best friends.

They can interact sometimes.

Likes making fun of his ponytail and changing eye colour.

She hates his violence.

She enjoys his stone collections and has helped him earn more.

Likes playing dolls with her.

Never met her because Gwendoline was "adopted" after Jinkesse died, but she has heard of her from other older koopalings.

Doesn't even care about her.

They are ok with her.

Gwendoline makes her debut in this game. Gwendoline is the boss of Crystalline Mine, the second world. Gwendoline's battle involves her throwing Poison Mushrooms at the player in an attempt to shrink or kill them. The Poison Mushrooms dissapear after 10 seconds. To defeat her, the player must simply jump on her three times, but note that she jumps around the battlefield and will spin in her shell upon being jumped on. 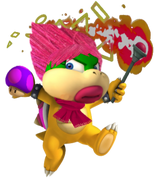 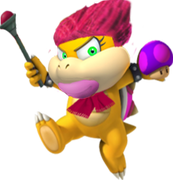 Gwendoline's second look. Her head turned yellow due to her eye colour turned into green. 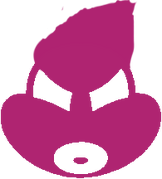 Her unused emblem for Mario Kart 8

Gwendoline in Super Mario: Adventure at Sea in her clown car