Start a Wiki
Gushens are purple octopi with yellow eyes and an orange mustache. They're commonly found in the Seaside Kingdom. Gushens are encased balls of water,wich they use to stay afloat on water surfaces.

As long as they're inside these water balls,they can fire powerful streams of water forward. Their streams behave similiarly to F.L.U.D.D.. Not only are these streams powerful enough to harm a Gushen's enemies,But they can also propel themselves forward and upwards. and they can even use these streams to clean liquids like lava.

However,they can run out of water. Once they run out,the ball of water will disappear and they'll turn gray. In this state,they're defenseless and move very slowly until they touch a body of water again.

Gushens appear in Super Mario Bubble as common enemies. They will stay in place and fire streams of water at Mario once he gets close.

A Sub-species of Gushens known as Ice Gushens Appear in Super Mario Snow Run. They behave the same as normal Gushens. Unlike the normal Gushens,they're capable of surviving in cold water and their streams of water will freeze you upon contact.

in Super Mario Splashers,Cappy is a playable captain and he uses a Gushen as his Main Weapon. The streams from the Gushen are very powerful and have a lot of range,But at the cost of most of Cappy's water supply. 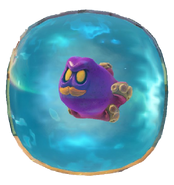 A Gushen in a water ball. 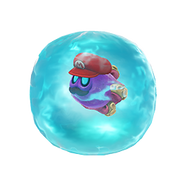 A Gushen captured by Mario.

A Gushen Captured by Cappy in Super Mario Splashers. 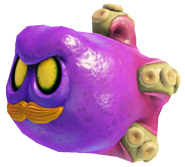 A normal Gushen without the water ball.

A Gushen that's out of water. 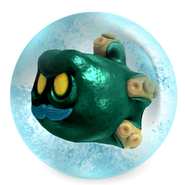 A Snow Gushen from Super Mario Snow Run
Add a photo to this gallery
Retrieved from "https://fantendo.fandom.com/wiki/Gushen?oldid=2906576"
Community content is available under CC-BY-SA unless otherwise noted.