Gush (or in Japanese: 吐き出す pronounced as Hakidasu) is a Fantendo character from the Riddle series made by GreenStar Studios. His first appearance is in Riddle's Epic Adventure! where he assists Riddle in his adventures alongside with Heart and Needle. He appears in all the games as well as in Munchy Monsters - 100 Person Mania as a cameo character.

He's a major citzen of Sky Heights reigned by Queen Soulia and helps her when needed. All of the games, Riddle's is his best friend and never leaves him along when a danger is facing. He has quite of a personality due to his elegance and charm, and his iconic wig. 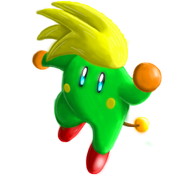 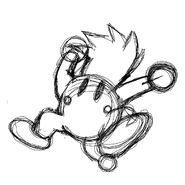 A quick sketch of Gush
Add a photo to this gallery
Retrieved from "https://fantendo.fandom.com/wiki/Gush?oldid=3092149"
Community content is available under CC-BY-SA unless otherwise noted.