“So... you had made it... and yet you had abandoned your Rookie... fu fu fu... fwa ha ha ha ha hah! You never cease to amuse me with your cowardice and failure, Popple!”
— Guramina, Mario & Luigi: Trio Trouble

While her origin is not fully revealed as of yet, it is revealed that Peach's and Bowser's descendants had repeated the same mistake from their ancestor, giving her feeling that her ancestor, Slanito, had failed to stop the cycle, or at least the cycle between the descendants. She is slightly bitter to her ancestor, but is willing to help him to solve the cycle once and for all, although her own methods may be dissonant with Slanito's pragmatic ways.

Upon being convinced by Commodo Webs that he will get rid of Peach and Bowser as well as everyone who stand on their way, but what Webs didn't told her is that he will destroy the Mushroom Kingdom, in which Guramina did not know but would certainly not tolerate. It wasn't until the end that Slanito starts to recogize her upon being told that she is his descendant.

After the event of Mario & Luigi: Trio Trouble, she vows to return and will find a way to get rid of Bowser in harm way, much to the shock of others, except Bowser who simply laugh at it as he doubt that she could find a machine that could harm up to his kingdom, although Guramina warns him that saying this will be a tempting fate.

Although physically similar to Slanito, Guramina had different clothing, in which include a long magenta robe, attachable shirt with pattern of what looks like a demon or a beast, and light-blue and magenta cloak. Her pants are light purple, and her shoes are shiny red.

Her mushroom cap is light green with golden yellow spots, with an angry Star emblem on the frontal spot. She also have two smaller mushrooms on the bottom back of her mushroom back which resembles of cottontails.

She also wears a cobalt tiara with a piece of an emerald on the center. The tiara itself had three spiky ends on the top, one on the center and one of each side-end. It is revealed that like Slanito's tiara of his own, Guramina's tiara can help her to learn magic better.

Unlike her ancestor, she is shown to be more rude, evil and ruthless, and prefers a more harmful way as she is aware that "ending a game of someone is pretty much even more effective than just plain banning them, as they can always come back no matter what", and consider her ancestor a bit too soft, but will not hesitate to help out anyone who got a common goal (which Slanito himself does have); conquering the Mushroom Kingdom for the better of all species.

With that said, she is considerably crazier than Slanito, and will not hold back in any fights, in which while make her to lose focus if she overdo it, also make her considerably more dangerous right from the start. But even her had a limit, and her magic will wane if she uses her most powerful magic too many times.

Because of the fact that she is form the far future, she may not be used for modern technology and may feel awkward when using items from the present, but she may get used to them with the help of her right-hand man, Piontos the smart and strong yellow Pianta.

Guramina is quick to track out traitors and anyone who deceived her, and will not show any mercy, as she know that senseless betrayal is nothing but cowardice.

Her magic is far greater to Slanito, to the point of rivaling (or even surpass) Kamek's, but also very inept for technology construction, in which require help from either Piontos and Slanito, as she does not know how to make or repair a machine, or comically, doesn't really know how to repair a toaster. In fact, if her machines is taken down, she must retreat before the situation get worse.

One of her more potent magic is the size-changing magic. This allows her to grow or shrink at will, unlike Slanito who needs to use Poison Mushroom to gain more size. Another of her own is that she can use magic of multiple elements, but none of them are more powerful than her light-based magic.

She can power-up other characters at will, but she noticed that each new power can give oneself a new weakness, so she mostly only use it to instead cover most of the one's weakness.

She can also levitate, allowing her to not only reach any place with ease, but also able to catch up someone in an unexpected way. However, she cannot levitate well if she is tired or hurt enough.

Of course, this is not without her weaknesses. She is not as fast or physically strong as Slanito, and while her magic are more powerful, she can hurt herself or her allies if used recklessly or backfired does to her relentlessness and ruthlessness. Her light-based magic can also be reflected by mirrors, in which can counter her if she does not expect it, although she does acknowledge that.

Guramina loves to mess around with others, and is not above of attacking others if they meddle in her plans, unless if she is aware that they didn't mean it or wanted to help her. She also likes sweets more than Slanito does, but tend to dislike anything too spicy for her.

She also likes making fireworks, which explains her tendency to say "Time to meet the sky!" does to how fireworks being fired to the sky and then explode, which may refers that the foes she face with might end up to be on the Overwhere. She also use fireworks as weapons, in which many does not saw that coming the first time she uses it against them.

She enjoy cooking as a past-time, and as such know what to put and what should not be used as an ingredient. She often make threats to anyone small or shrunken into the cooking pot or anything similar, although this only happens once, although her threats can understandably shock the others, especially the threatened ones.

She tend to dislike stupidity and lack of comprehension, and is not above of calling someone a fool or an idiot, although she refrain form using such insults to her men. She also tend to be irritated when her magic or her minions are being mocked.

Although she does enjoy destruction, she only do it on territory she deems unworthy. She also prefer to keep her enemy to receive "Game Over" than leaving them alive, unless if the enemy in question is willing to join her, long as they remains loyal.

She also tend to be amused by a bit cowardice (unless if it is from betrayal against her) and very much failure, and tend to laugh when they continually fails. This can end up to irritate the others, however. She doesn't do it on her minions if they fails, but will do so if they did so because of their cowardice. She does acknowledge that cowardice does not means a one-way to failure, and will congratulate anyone who are not brave but nevertheless successfully faced the danger, like she did to Luigi.

While she loves music, she prefers techno, orchestra and pop, and doesn't like rock and heavy metal, although don't mind having them mixed with other genre as long as they sound good.

She will set to appears in this game as one of the main antagonists, and as one of Commodo Webs' elites. Her exact role outside of it is unknown, but is revealed to be one of the reoccurring bosses like Webs' other elites, and will have a bit more significance to the story than the same elites.

Though Guramina is not physically present in Stampede Breakfast 2, Petey Piranha has an alternate costume based on her. He wears her vest, as well as a hat identical to Guramina's mushroom cap.

Guramina appears as a playable character in Super Mario Spikers, appearing as an Offensive-type character. Her outfit is a green skin-tight jumpsuit with a dress, with lime stripes on it. In addition, she also has Ztars, which help her with saving balls, making spikes, and attacking enemies. Her emblem is a Ztar, and her theme is Classic Country.

As Guramina is from the future and prefers not to time travel so constantly, her relationship is more minor with lesser characters, but more apparent with the protagonists and Bowser.

Guramina, despite the disappointment she felt does to dealing with Bowser's even more immature descendant, Bowser Koopa III (aka Grayjack), leaving her a belief that Slanito failed to stop the feud with Bowser himself, still respects his great grand-father as a respectable (if insufferable) genius, and able to put a dastardly plan that almost never goes out-of-hand unlike Bowser who can go to measures too extreme, mostly without knowing it or caring about those details.

Guramina and Slanito only fought each others because they did not recognized each others yet, and because Commodo Webs had tricked the former one.

Although the two sometimes get into argument until Slanito had to intervene, the two does get along well overall, but feels that Kyu T. need more than her impressive athletic skills to get the best of the heroes. She can even become angered if she or her great grand-father get hurt by her enemies.

Guramina, unlike Slanito, are usually in bad terms in adventures, does to Guramina's ruthless and cruel ways to solve the issues of the Mushroom Kingdom, even if it would work. Mario also tend to remember to never underestimate her magic power, as it is as threatening as Kamek's, if not even more.

Guramina tend to threat Luigi as a shadow of his brother, and often reminds the green brother the time Mario did not brung him into adventure, with Odyssey the most recent. Luigi is often frightened that a Toad, even moreso a Toadette, could be so powerful and destructive, and tend to cower when he sees her, but can and will fight her if she is becoming a real threat.

Surprisingly, unlike Slanito who resents Mario and Bowser the most, Guramina hated Peach the most does to her utter helplessness in general. She outright said that once the Mushroom Kingdom will be conquered in her possession in the present time, Peach will be the first one to be banned from the Kingdom. Peach does not appreciate Guramina's rudeness and even believe that she can be an even bigger danger than Slanito, who is at least only on-par with Kamek in term of magic power.

Bowser found Guramina very weird and creepy, but was happy that she cannot be always in the present. He also find her annoying does to her rudeness, and even claims multiple times that he will not let her get her hands on Mario, he wants that only he and his troopers will be the one who take out Mario, and refuse to see a mere Toadette getting rid of Peach.

Wario often wondered what is up with her, and prefer to deal with Slanito or Kyu T. than with her. He find her very creepy and will fight back the moment Guramina is up for something harmful against him. Guramina thinks he is just a slimeball and that a slimeball like him shall not be respected at all. She also said the same thing to Wairo's usual partner, Waluigi. 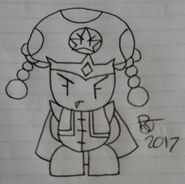 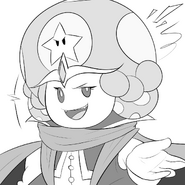 Guramina in Super Mario Spikers
Add a photo to this gallery

Retrieved from "https://fantendo.fandom.com/wiki/Guramina?oldid=2917091"
Community content is available under CC-BY-SA unless otherwise noted.