Guppy the Shark is the first game in the Guppy the Shark series that features Guppy in his first adventure on the Nintendo 3DS and the Wii. There are 6 worlds and 5 bosses and once the final boss is beaten, the sixth world will open up. It will be released on October 11, 2012 and it's rated E in America and 3+ in PAL regions. It is rated A in Japan, and had a sequel, called Guppy Returns. Versions for the Storybook and the Bluevolt 2 were released in March 2, 2012.

Guppy's adventure starts when the villain Nocturne sends an army of airships to steal and scatter the resources of the deep sea. Guppy, being the hero of the land, is ready for action. He blasts out of the water, only to be shot down by a cannon. Guppy sinks into the water, too pained to stop them. His old friend, Bucket, convinces him to get up and help the creatures of the ocean. Guppy, not wanting to give up, swims away, itching for adventure!

Guppy's main attack, his signature spin, is present. Also, the bite move is used. Power-ups can give Guppy new powers, which then replace the spin. 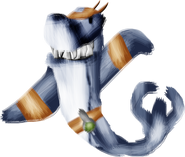 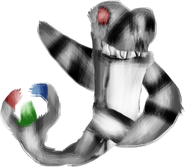 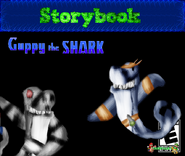 Storybook version.
Add a photo to this gallery
Retrieved from "https://fantendo.fandom.com/wiki/Guppy_the_Shark_(Game)?oldid=1331493"
Community content is available under CC-BY-SA unless otherwise noted.