The Gum Flower is a Flower Power-Up that appears in some Mario Games, its appearance differs slightly between games however its abilities remain the exact same.

The Gum Flower has two distinct appearances, the original appearance and the New Version.

The Original Version of the Gum Flower appears similar to other common Flowers with although is coloured various shades of Pink, it doesn't appear any different aside from the colours.

The New Version of the Gum Flower changes its appearance somewhat, its body has become a sticky substance of Reddish-Pink and Purple while its leaves appear to be inflated pieces of gum, its head also has this feature. Inside the three inflated sections are three yellow balls that are suspended in the flower, the center ball contains its eyes.

The third iteration of the design has a more plant-like appearance with the head of the plant appearing like a closed flower bulb and having a green stem and long leaves which are a darker shade and closer to emerald green than the regular Fire Flower. The plant has a pink-purple striped pattern to its petals which coil around a Pistii with a yellow orb-like bulb protruding from the top. The Flower also has additionall yellow bulbs around the base of its head which are connected to the plant via small red shoots.

In Gum form, the user can stretch their fists to attack enemies on a distance, melt to get through tight spots and even inflate to float for a brief time. 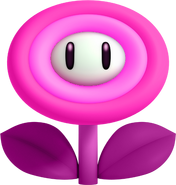 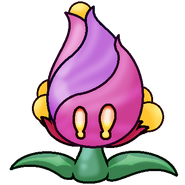 Gum Flower's Appearance (2020)
Add a photo to this gallery
Retrieved from "https://fantendo.fandom.com/wiki/Gum_Flower?oldid=3231211"
Community content is available under CC-BY-SA unless otherwise noted.