Fantendo - Game Ideas & More
Register
Don't have an account?
Sign In
Advertisement
in: Free to use Characters, What is the New Fantendoverse?, Females,
and 12 more

Guadalupe Invalidez is the cousin of Nycho Invalidez, who hung out with him originally when they were younger and her humor and personality more or less rubbed off on Nycho when he wanted to break out of his timidness. The character was created by Helena Harper (t∣b∣c) as another character to help develop Nycho Invalidez's background and character since he has become part of Unten's group.

Guadalupe Invalidez is Nycho Invalidez's cousin and both formed a friendship since they were younger. After Camilia Espina encouraged Nycho to open up more, he began to take more on of Guadalupe's personality traits, which tended to be reckless and in the name of humor. She works at a taco restaurant as her job and as such, tends to cook up tacos and other mexican cuisine when over at other people's houses, often going out to the grocery store to get ingredients. She is notably very harsh on poor cooking, although she claims she's the furthest thing from a professional cook.

Much like her cousin, Guadalupe was not intended to become an permanent cast member, but was enjoyable enough to write that she became somewhat of a mainstay, even if her roles are more subdued than even her cousin. Her reception has overall been positive.

Guadalupe is a brown-skinned woman with black hair, which is drooped over the left side of her face to cover her left eye. It is also styled into pigtails, which have blue bows. Her eyes have a green color and she has sharp teeth. She wears a blue blouse with a diamond star pattern printed across it and a blue shirt, as well as a pair of black socks and blue heeled shoes.

In World Tournament, she wears a belly bearing deep scoop black shirt with a white collar across the neckline. She also wears a lime green bra that can be seen through straps. She continues to have her hair styled in pigtails, although now wears lime green bows with a blue eyeball in the middle of the bows. She also wears black elastic sports shorts and white gym socks with blue bands. In the art, she can be spotted with one black shoe with lime green braces- this is to showcase that that her shoes often are in flux during this story, either wearing them or not at seemingly random times.

Guadalupe Invalidez acts somewhat similar to Nycho, usually making somewhat crass and random remarks. She has a somewhat inflated sense of self-importance to herself, although not to what she sees as a obnoxious degree. She acted out as a kid to get attention, and continues to do so as a adult, and can be seen as fairly immature by others around her. She has no real filter, just like Nycho. She differs somewhat in that she actually does care about her appearance, where as Nycho just puts whatever is lying on the floor in the morning.

While she holds herself in high regard, she prides herself most in her cooking, which she will stop at nothing to share with others. She will often stop on a dime to go grocery shopping for proper ingredients, and this is where Nycho's fascination for high-quality food likely stems from. She judges other people's cooking fairly harshly, although she admits she's far from a professional cook herself. She has been able to actually leverage her talent at her job to get a higher pay due to her talent, unusually so considering she works at a fast food restaurant.

She tends to be pigeonholed as the role of a cook for the Fantendo Firehouse group, at her own volition, often taking over for Rachel Harel or others that cook, only respecting Nycho if he decides to cook. Despite this role as a cook, Guadalupe has quickly become close to the group members to the point where she decides to move into the apartment building many of them share- although she claims it was only to get closer to her place of work, suggesting that she doesn't want to admit a budding friendship with anyone. As seen in Fantendo - Zenith, she tends to warm up to people she was originally cold on- having somewhat warmer interactions with Hybrid IV who she had only met about two scenes earlier.

As an outsider to the group, Guadalupe is uniquely mostly unaware of who Unten or any of his friends are, mostly concerned with her cousin. This gives her a strange dynamic with most of the other cast that gives her an off-putting vibe that slowly grows friendlier with time and friendship forming.

While not mentioned directly, Nycho mentions a cousin that he wants to play a prank on at the end of the story. This is revealed to be Guadalupe in her debut, as Nycho feels obligated to have her over at the firehouse for accidentally destroying her toilet.

In a post-credits scene, she appears to berate Nycho for breaking her toilet and demanding he figure out where she's going to live while her toilet gets fixed. This is to set up her appearance in Rendered NULL.

Guadalupe Invalidez appears in Rendered NULL in Chapter 2, living in the firehouse that Nycho owns while her toilet gets fixed. Her role in this story is rather minimal, although she has a minor subplot with her and Kimi Lee, who isn't eating to remain thin for Tōsō Musuko. She is set up as the role of a cook for the Fantendo Firehouse, as well as expressing her discontent for Obena.

Still sticking around with the group, she is buying groceries for meals later with Kimi and Hinata. When they return from the grocery store, they join the game of Truth or Dare with the other members of the Fantendo Firehouse as well as the Shori. Gradually getting drunk over the course of the story, Guadalupe is asked about her feelings towards Obena as part of a truth question. Guadalupe's feelings have become complicated for Obena- while she finds her cute and attractive, she still feels envy towards the close relationship she has with Nycho, which she used to have with him. Guadalupe then reveals as part of her bottle spin that she knows Über and Hinata Itō fornicated- but makes him reveal exactly where. Later, she is dared to kiss Obena- doing so on the cheek and then on the lips.

The next morning, she is said to be suffering from an hangover. She later scorns Rachel Harel who is attempting to cook breakfast burritos- which she accidentally burns when caught up in conversation with Unten, causing Guadalupe to stomp it out on the floor and take over for Rachel.

Guadalupe is mentioned in the first episode, Pink Promise, of the series, referring to her working at Dorado Taco, the workplace of Pinku Rozen. Her timeslot was said to be shifted over- likely due to a promotion or her increasing presence at the Fantendo Firehouse opening a new opportunity for her to come closer to work.

She physically appears in Episode 4, Lime to Me, when Pinku is working her shift at Dorado Taco. She engages in a quick conversation about the upcoming safety inspection as well as the closure of Virus Burger.

Guadalupe can first be seen in Fantendo - Zenith talking to Nycho over the phone. After looking over the guests, she hands to phone to Denos so he can talk to Nycho Invalidez. She appears later feeding a meal to the Terracotta Golems and asking Denos about what the possible consequences are of The Mistake blowing up the Earth- trying to get a feel for what elemental effect that would bring. She can then be seen in a later scene watching Hybrid IV arm wrestling a Terracotta Golem, having warmed up to the guests she seemed to be wary of originally. She later addresses Obena and Nycho a goodbye after they head off to The Fan's surgery.

Guadalupe Invalidez lacks any kind of super power, not even a hint of Nycho's weird strength. She is quite capable of getting what she wants, however, and usually haggles to get the best prices on her food. Many grocers have learned to fear her, as she usually holds up lines for a hour over the prices of twenty or less items. She lacks any kind of fighting style and has zero interest in fighting, as it would get in the way of what she feels truly matters in life.

This gives her the unique position of currently being the only non-combatant full-time member of the Fantendo Firehouse, acting entirely as support and as a cook.

Guadalupe is the cousin of Nycho Invalidez and influenced his current personality through their close friendship growing up. The two still play pranks on each other and have a great deal of respect for each other, usually talking about the same man or woman together to figure out if they're worth the time perusing. Guadalupe feels as if she's getting more distant from Nycho thanks to his increased involvement with the "Fantendo Smash Bros.", which she has no interest in.

Guadalupe is jealous of Nycho and her's growing friendship, often making jeers about how naive she tends to be. Unten and her have a mutual dislike of her, although Guadalupe can't stand to do anything more than make somewhat passive-agressive comments towards her because deep down she realizes that Obena makes Nycho happy.

Guadalupe doesn't like Unten Bluzen because he is the leader of the "Fantendo Smash Bros.", which is taking away from time her and Nycho could spend together. She does bond over their mutual dislike of Obena, although Guadalupe would really rather not talk to Unten at all. She has however, grown interested in some of the other members of team. 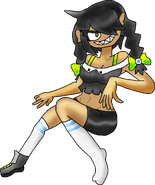