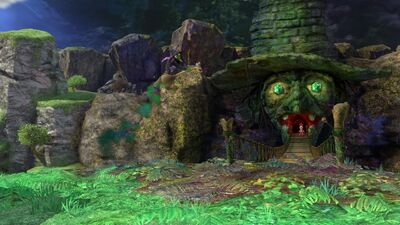 Role in The Elemental Labyrinth

Gruntilda's Lair appears as one of the many levels to explore in the Earth Realm. After Banjo & Kazooie are awakened on Spiral Mountain, the duo take on a Gruntilda puppet possessed by Alluviem's influence. After the puppet falls off the lair due to Banjo & Kazooie activating the Mighty Jojinator, the real Gruntilda flees off to join the villains in the Elemental Labyrinth.

Eventually, Gruntilda is fought in the lair and falls out of Alluviem's control. Reluctantly, Gruntilda ends up joining the heroes to face off against the six deities in order to take back the World of Trophies once again.

Retrieved from "https://fantendo.fandom.com/wiki/Gruntilda%27s_Lair_(Galactic_Battle)?oldid=3046577"
Community content is available under CC-BY-SA unless otherwise noted.